Khaye-Malka (Marya) Lifshits, later Frumkin or Frumkina, and who went by the revolutionary nom-de-guerre Esther, was born in 1880 to a wealthy merchant family in Minsk. She began her radical activities as a revolutionary “women’s circle” activist when Jewish men and women were organized separately. 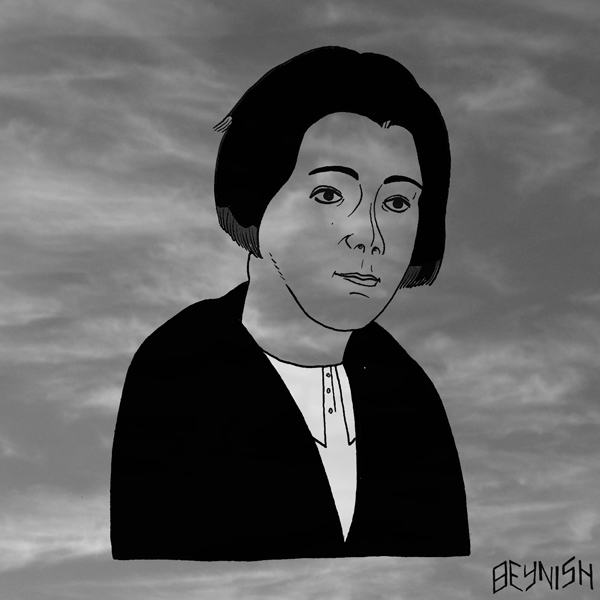 She studied philology and Russian literature at the Pedagogical University in Saint Petersburg and, upon graduation, returned to Minsk where she became active with the Social Democrats. Esther joined the General Jewish Labor Bund in 1901 led efforts to bring “the revolution to the Jewish street,” and, in the period immediately after the 1905 Revolution, was the only female member of the early Bund in a policy-making position.

Within the Bund, Esther was a vocal advocate of the promotion of Yiddish among workers and Yiddish education in secular schools. She was a delegate at the Yiddish language conference in Czernowitz in 1908 where she advocated Yiddish as the language of the Eastern European Jewish proletariat. Yiddish, Esther once stated, “Whether it is beaming or laughing, serious and harsh or soft and dreamy, dry or damp—is always a divine work of art, always a picture of the people that created it.”

Between the years 1905 to 1917, Esther was imprisoned numerous times for her revolutionary activities. In late 1912, she was banished to Siberia. However, she managed to escape and spent most of World War I in hiding.

Following the February 1917 Revolution, Esther returned to Minsk, where she was elected to the Bund Central Committee and to the Minsk Revolutionary Council.

When the Bund splintered in April 1920, Esther became a leader in the KomBund and then the EvSektsiia, the Jewish Section of the Communist Party.

She led campaigns against the religious establishment. Esther was instrumental in establishing a network of Yiddish schools and in the official recognition of Yiddish as one of the national languages of the Soviet Union.

From 1921 to 1936, Esther was the vice-rector of the KUNMZ, the Communist University of the National Minorities of the West in Moscow, where she taught an advanced seminar on Leninism. During this period she also edited the Moscow Yiddish newspaper עמעס (Truth), which dealt with issues of culture and education, published a Yiddish biography of Lenin, and translated the works of Lenin into Yiddish. In 1924 the Presidium of the Central Executive Committee of the USSR founded the Commission for the Rural Placement of Jewish Toilers. As a member, Esther contested a plan to have one-quarter of the Jews in the Soviet Union involved in agricultural occupations. Industrialization, she believed, was an essential goal and accomplishment, regardless of the assimilatory effects it may have upon Jews.

Esther was among those liquidated in the Stalinist purges of 1936–1938. She was arrested and imprisoned in January 1938, all the while denying the charges against her. In August 1940, she was sentenced to eight years in a forced labor camp for political prisoners in Kazakhstan, where she died on June 8, 1943.

We honor Esther to call attention to her legacy as the only woman in a leadership position in the Bund and the Jewish Section, as well as her important contributions to the development of a secular alternative to Jewish religious culture.

Here’s the late Adrienne Cooper singing the classic song, “אַרבעטער פרויען (Women Workers).” With words by Dovid Edelstadt, the song calls on oppressed women workers to join the labor movement and fight for justice and equality.

Originally published in the New York newspaper פרייַע אַרבעטער שטימע (Free Voice of Labor) in 1891, it was sung by striking workers in Russia and Poland. It begins:

Worker Women, suffering women! Women, who languish in the home and factory!
Why stand at a distance?
Why not help build a temple of freedom and human joy?