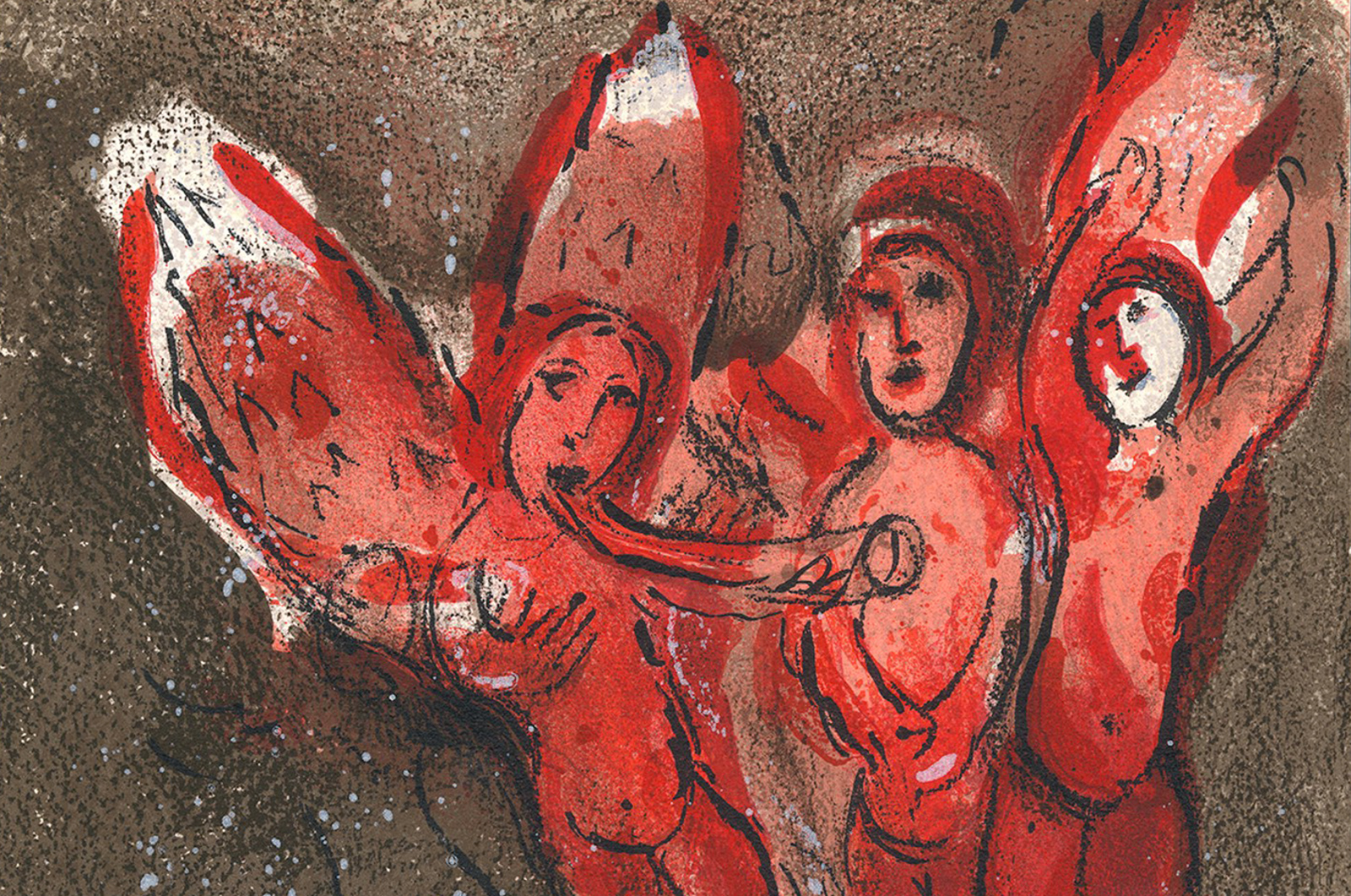 In this Juxtapoetry, we look at two poets — Itzik Manger and Federico García Lorca — who translated biblical tales into their respective folk poetry traditions, in the process creating charming, complex and unorthodox variations on classic, pious themes.

The psalm-engraved amulets
Shine down from all four walls.
Ten Jews in round, sable-lined hats
Keep rhythm with their palms.

They eat their boiled peas,
And dip their beards in beer.
“Reb Avrom, wonder of wonders!
A great miracle has happened here.”

Our Father Avrom smiles
Into his long, gray beard.
He hears little Yitskhok whimper
Under a sheet, so near.

He closes his eyes for a moment
And sees three Turks arrive,
Holding on tightly to the thread
Of the small child’s cries.

They shake off all the dust
From their clothes and from their shoes
And they all kiss the mezuzah
And speak quickly, voices smooth:

“Mazel tov, Reb Avrom
You likely remember the evening
When your old lady Sora
Laughed at us, unbelieving.”

And before Avrom can say to them
“Welcome my dear guests!
Please sit down at the table
And drink and sing and feast––”

The Turks turn up their collars
And vanish like a song.
Avrom opens up his eyes:
“Where have those strangers gone?”

“God is with you, Reb Avrom,
Hi dye-dum, dye-dum dye…
Come, sing with us the praise-song
Of the great Turkish rabbi.”

Ten Jews in round, sable-lined hats
Keep rhythm with their palms.
The psalm-engraved amulets
Shine down from all four walls.

Listen to two very different musical settings of Manger’s poem. The first, a 1970 Israeli cast recording from Itzik Manger’s Khumesh Lider as performed by the Teatron Amami. And next, a recording of Raphael Frieder performing an art song setting of Manger’s poem by the composer Lazar Weiner, courtesy of the Milken Archive of American Jewish Music.

One of Itzik Manger’s great contributions to Yiddish poetry was a style he termed literatoyre — a portmanteau of “literature” and “Torah.” In developing this genre, he was tapping into a longstanding Jewish tradition of both formally and informally translating biblical text into vernacular languages, as well as the creation of novel Rabbinic-styled legends and extrapolations on Biblical stories. Manger (1901–1969) wrote his own poetic retelling of the Book of Esther, as well as a volume called Khumesh-lider, both of which transfigures Biblical characters into Yiddish-speaking Jews. The effect is obviously humorous, but it also serves to shrink the cultural and historical distance separating Eastern European Jews and the characters they considered to be their patriarchs and matriarchs.

“Our Father Avrom Holds a Sholem Zokher” imagines a biblical episode occurring after the birth of Isaac, when his parents Sarah and Abraham were 90 and 100 years old, respectively. The previous poem in Khumesh-lider depicts Sarah and Abraham being visited by three strange men who predict that the elderly couple will, in all unlikelihood, conceive a child. In “Our Father Avrom Holds a Sholem Zokher,” Manger imagines Abraham observing an Ashkenazic custom of hosting guests on the first Friday night of a newborn boy’s life (Sholem Zokher literally means, “peace upon the male”). The ceremony itself is anachronistic for the Biblical Patriarch, and Manger in typical style lays heavy on the details. Some are ethnographic, like the hanging of protective amulets engraved with Psalms (shir-hamaylesn), the round, sable-lined hats (shtraymelekh) worn by the singing guests, and the eating of peas, a round food associated with the Jewish life cycle. Manger’s other innovations create dissonance between the “modern” Eastern European setting and the ancient, Middle Eastern source material. In describing the three guests in Abraham’s vision as well as the niggun sung at the ceremony as “Turkish,” Manger toes the line between cosmopolitanism and Orientalism and also creates a parallel to the Christian tradition of three kings or wise men coming “from the east” to visit the newborn Jesus.

What is interesting about Manger’s depiction of Abraham is that the new father doesn’t seem particularly aware of his covenant with God or identity as a Patriarch; he and Sarah just seem a regular Jewish couple who have been inexplicably surprised with a child in their old age. There is an unsettling element to Abraham’s vision of the Turkish guests, the way they are “Holding on tight to the thread / Of the small child’s cries,” how they tell Abraham to remember their previous visit and Sarah’s disbelieving laughter. It’s as if Abraham doesn’t know the guests are angels, or if he does, he doesn’t understand why these angels should be so interested in him and his son Isaac. The amulets on the walls which bookend the poem link the Patriarch Abraham to King David the Psalmist to any old Avrom (or young Itzik) in 1930s Poland.

Manger may be bringing Abraham into the Yiddish reader’s cultural landscape, but at the same time he is giving the reader a unique glimpse into Abraham’s psychology at the moment. By removing some of the foregone conclusions of Abraham’s destiny and zeroing in on a scene outside the official biblical narrative, Manger allows pious and secular Yiddish readers alike to see Abraham as an ordinary man in rather extraordinary circumstances. We have the opportunity, not always allowed in a traditional Jewish setting, to ask what we as individuals might have thought, felt, or done in the Patriarch’s place. Like any literature, the poem has the capacity to deepen one’s faith or one’s cynicism.

“San Gabriel” first appeared in Federico García Lorca’s 1928 poetry collection Romancero gitano. García Lorca (1898–1936) described his poems as comprising a “retablo,” or carved church altarpiece, of Andalusia, his native region of southern Spain. As the book’s title suggests, the poet placed particular emphasis on the folklore of the Andalusian gitanos, as Romani people are called in Spanish. “San Gabriel” is the third in a triptych of poems about three major Andalusian cities – Granada, Córdoba, and Seville — and three biblical archangels — Michael, Rafael, and Gabriel.

On its face, “San Gabriel” is a ballad retelling the Gospel story of the Annunciation, in which the Archangel Gabriel appears to the Virgin Mary and tells her that she will become pregnant with Jesus Christ. But in Federico García Lorca’s version, the setting is now a street in Seville, and the woman being visited is a “well moonlit and poorly dressed” gitana named Anunciación de los Reyes. Some elements are taken straight from the Gospel text, like Gabriel’s greeting, “Hail…” (“Dios te salve…” in Spanish) which became the opening of the Ave Maria prayer. Like Itzik Manger, García Lorca playfully incorporates some material anachronisms – such as Gabriel’s patent leather shoes. But what is truly anachronistic are the many indications that Anunciación is already immersed in a world of Andalusian folk-Catholicism, similar to how Manger’s Abraham seems to be some sort of chassid. Take her own name: Anunciación literally means “Annunciation,” and is a name that might be given to a girl born on the feast day commemorating the biblical Annunciation. De los Reyes means “Of the Kings,” and could refer to the “Three Kings” who visited the infant Jesus or “La Virgen de los Reyes,” another epithet of the Virgin Mary who is a patron saint of Seville. Of course, none of these names are logical if we are to read this ballad as a simple retelling of a biblical story. Neither does it make historical sense for Gabriel to be the “great-grandson of la Giralda,” the latter being the tower of the Seville Cathedral, which was originally built at the turn of the 13th century as the minaret of a mosque. And if Anunciación is a stand-in for Mary, to call her “mother of one hundred dynasties,” is, in the literal sense at least, rather unorthodox. Throughout the poem, García Lorca switches between past and present verbal tenses, intentionally confusing the narrative.

We’re left to wonder what García Lorca’s overall intentions may have been. From the narrator’s descriptions of Gabriel’s otherworldly beauty and Anunciacion’s erotic response: “Your gleam spreads open the jasmine / Upon my flushed face,” we could interpret the encounter as a sexual one, maybe ending in a non-immaculate conception. Nevertheless, it’s impossible to definitively trace out any kind of coherent heresy or Gnosticism in the poem. If nothing else, García Lorca is raising up a “dark-skinned and wondrous” yet ordinary gitana woman to a position of near-divinity, rewarded for her and her people’s piety by becoming a mother, maybe not of the Messiah, but of a child “more lovely / than the stem of the breeze,” whom she will still love divinely.

At the end of the poem, Gabriel disappears up a ladder into the sky, and the stars “became then everlasting.” This is Federico García Lorca at his cleverest and most poignant: in Spanish siempreviva literally means “everlasting,” but it is also the common name of a Mediterranean flower with bright, golden blooms. Sometimes heaven and earth do meet, and well-known stories take surprising paths. Such miracles do happen from time to time, at least in García Lorca’s retablo and Itzik Manger’s Midrash.

A beautiful reed-like boy,
Wide shouldered, slight in stature,
Skin like a nocturnal apple,
Sad-mouthed, large-eyed,
With a nerve of hot silver
Roams the deserted street.
His shoes of patent leather
Break the dahlias of the air,
With two rhythms singing
Brief, celestial dirges.
On the shore of the sea
No palm tree is his equal,
Nor any crowned emperor
Nor bright, moving star.
When he bows his head
To meet his chest of jasper,
The night seeks a lowly place,
For it wishes to kneel.
Lone guitars sound
For San Gabriel, Archangel,
Tamer of the night moths,
And foe of the willows.
San Gabriel: the child is crying
In the womb of its mother.
Forget not that the gitanos
Gave you your clothing.

Anunciación de los Reyes,
Well moonlit and poorly dressed,
Opens the door to the bright star
Which had come down the street.
The Archangel San Gabriel,
From amongst smile and lily
Great-grandson of la Giralda,
Was coming for a visit.
In his embroidered vest
Throb hidden crickets.
The stars of the night
Turned into bellbind blooms.
San Gabriel: Here, you’ve got me
With three nails of joy.
Your gleam spreads open the jasmine
Upon my flushed face.

Hail Anunciación,
Dark-skinned and wondrous.
You shall have a child more lovely
Than the stem of the breeze.
Ay San Gabriel of my eyes!
Gabrielillo of my life!
I am dreaming of sitting you down
On a chair of pink carnations.
Hail Anunciación,
Well moonlit and poorly dressed.
On your child’s chest will be
One mole and three wounds.
Ay shining San Gabriel
Gabrielillo of my life!
In the depths of my breasts
The tepid milk is born.
Hail Anunciación,
Mother of one hundred dynasties,
Your eyes are shining dryly,
With the landscapes of horsemen.

The child sings into the bosom
Of the surprised Anunciación.
Three green almond bullets
Tremble in his little voice.

San Gabriel, now climbing
A ladder into the air.
The stars of the night
Became then everlasting. 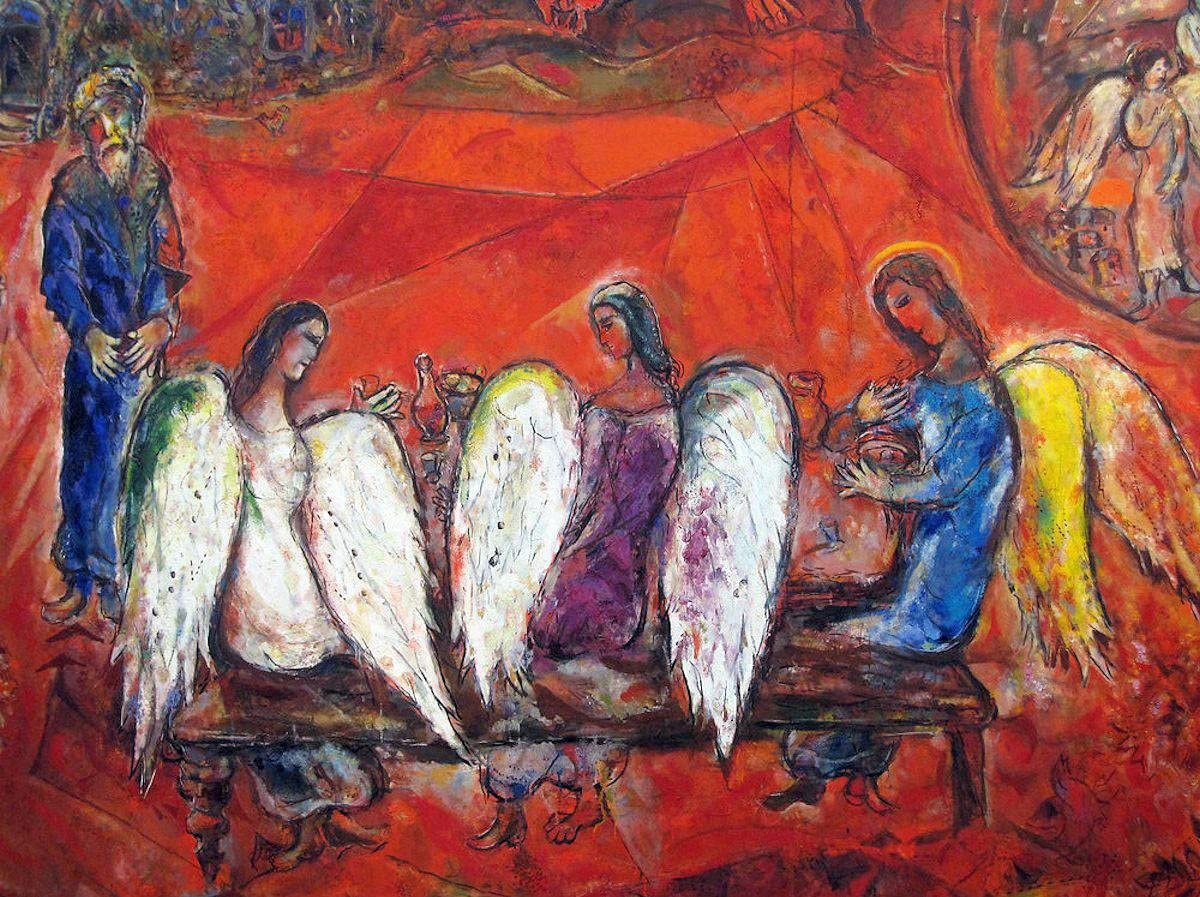 Itzik Manger Reads from his Poetry, streaming from the National Library of Israel.