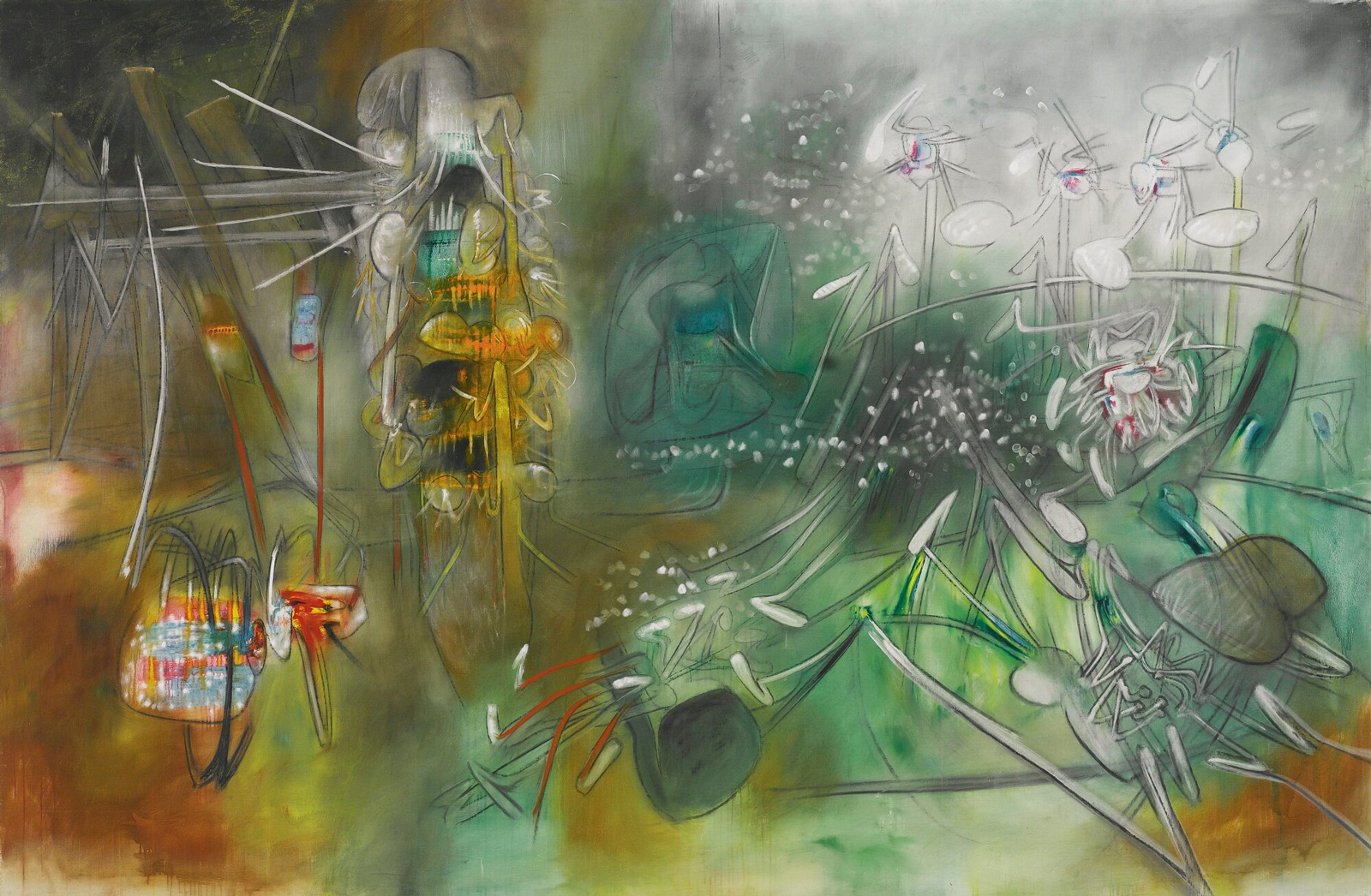 In this edition of Juxtapoetry, two poets exiled in the United States (Bertolt Brecht, exiled from Germany during World War II, and Dunya Mikhail, who left Iraq in the 1990s) reflect on the loss and attachment — both spiritual and material, that comes with forced emigration.

To My Little Radio

You little box I carried on my flight
Anxious lest the fragile valves should break
From house to train, from train to house to boat
So that my enemies might always speak
Beside my bed and to my agony
The last I hear at night, the first by day
Of all their victories and my dismay:
Give me your word you won’t give up on me!

Click on the videos below to listen to a setting of “An den kleinen Radioapparat” by Austro-Hungarian–born composer Hans Eisler, a frequent Brecht collaborator who, like Brecht, spent most of the 1940s exiled in Los Angeles. On the left you can hear the original German as performed by Theo Blackmann and also a translated version by English band Chumbawamba (of “Tubthumping” fame).

Bertolt Brecht fled Nazi Germany in 1933, spending the rest of the decade mostly in Denmark and Sweden. In 1941, he managed to acquire a US visa and settled in Santa Monica, California. Much of Brecht’s most famous poetry and plays were written during this long period of exile from Germany, including his poem “An den kleinen Radioapparat” (To My Little Radio).

The poem addresses a portable radio that the speaker has painstakingly brought with him on his complex route of exile (“from house to train, from train to house to boat”). The importance of the radio, however, is not the sentimental value of the object itself, but its function: “So that my enemies might always speak.” Instead of seeing the radio as a form of entertainment to pass the time or forget his predicament, for Brecht it is a tool for his almost masochistic compulsion to keep up with the (always bad) news from home.

A common theme of Brecht’s exile poetry is a sense of guilt at having escaped when so many could not, and also of his powerlessness as a writer in a time of war. Listening to Nazi propaganda radio out of Germany could have fed this guilt, and yet given the technology of the time, perhaps these broadcasts were one of Brecht’s few means of connecting to his countrymen, experiencing some of what German anti-fascists were going through on the ground, and remembering their plight and struggle.

The plea in the final line – “Give me your word you won’t give up on me!” – suggests that for the exiled Brecht, the silence of the little radio would have marked the permanence of his exile. A break in this one-way communication threatened to destroy his spiritual and psychic connection with Germany, and may have prevented him from ever returning (as he eventually did in 1949 – to East Germany).

In her poem, “كنتُ مسرعةً” (I Was in a Hurry), the Iraqi poet Dunya Mikhail also starts off with an image of a hurried flight from one’s country, but from the first line she boldly voices what Brecht perhaps did not want to say outright: “Yesterday I lost a country.” Mikhail’s speaker does not pretend to have had the foresight to bring along some symbolic object connecting her to her country: with humble self-derision she concedes, “I was in a hurry / and didn’t notice when it fell from me / like a broken branch from a forgetful tree.”

For so many refugees, the goal of gaining physical safety comes before any thought of what they are losing; this is not “forgetfulness,” but an unconscious survival strategy, which of course has its own painful consequences.

Mikhail looks for her country in images – both concrete and abstract – that would be familiar to nearly any refugee: a suitcase, a lottery ticket, a policeman’s uniform, the questions of children. Each image is paired with a verbal participle, creating a clear symmetry in the Arabic, as each participle begins with the letter mīm (مـ‎). The conception of her country is alternately a grammatical object that has been altered by outside forces (“engraved on a rock,” “cancelled like a losing lottery ticket”), or a subject which is continuously changing (“rushing forward without a goal,” “rolling like a helmet on the sand”). In any case, her country is not how it was when she “lost” it just yesterday, and it is not easy to recognize or find without some imagination.

I think the most moving part of the poem is its turn: we lose things quietly everyday, but there is particular pathos in someone asking strangers for help to find and return something so abstract and impossible to regain as one’s country. “If anyone stumbles across it, / return it to me, please…/ It is my country…” The act of asking requires courage, and also a fierce hope that these strangers will understand what one means. 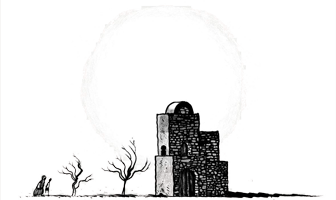 I Was in a Hurry

Yesterday I lost a country.
I was in a hurry,
and didn’t notice when it fell from me
like a broken branch
from a forgetful tree.
Please, if anyone passes by
and stumbles across it,
perhaps in a suitcase
open to the sky,
or engraved on a rock
like a gaping wound,
or wrapped
in the blankets of emigrants,
or canceled
like a losing lottery ticket,
or helplessly forgotten in Purgatory,
or rushing forward without a goal
like the questions of children,
or rising with the smoke of war,
or rolling in a helmet on the sand,
or stolen in Ali Baba’s jar,
or disguised in the uniform of a policeman
who stirred up the prisoners and fled,
or squatting in the mind of a woman
who tries to smile,
or scattered
like the dreams of new immigrants
in America.
If anyone stumbles across it,
return it to me, please.
Please return it, sir.
Please return it, madam.
It is my country. . .
I was in a hurry
when I lost it yesterday.

Watch and listen to Dunya Mikhail recite “I Was in a Hurry” in both Arabic and English, in a 2018 performance with the National Arab Orchestra in Detroit, under the direction of Michael Ibrahim. 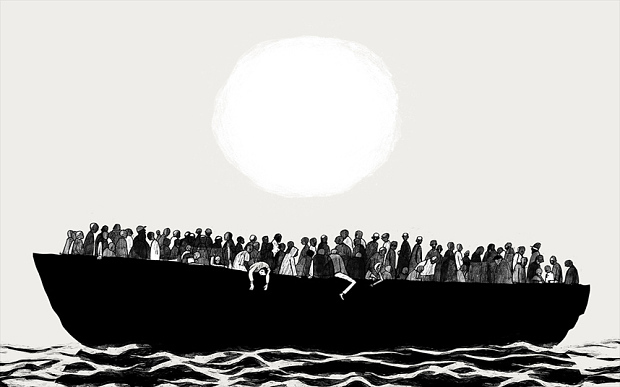 Bertold Brecht, “To My Little Radio” from The Collected Poems of Bertolt Brecht, translators David Constantine and Tom Kuhn

Dunya Mikhail, “I Was In A Hurry” from The War Works Hard, translator Elizabeth Winslow

Center & Bottom Image: David Foldvari, from: Save the Children Refugees Project, 2015, used by permission of the artist.