In what sort of light do we see the world? Where does the light come from, and what do we do with it? In this Juxtapoetry, American poet Mary Oliver and Polish Yiddish poet Mordechai Gebirtig offer two morning-time meditations on humans’ relationships to the world they are born into and the world they wake up in each day.

Every morning
the world
is created.
Under the orange

of summer lilies.
If it is your nature
to be happy
you will swim away along the soft trails

for hours, your imagination
alighting everywhere.
And if your spirit
carries within it

each pond with its blazing lilies
is a prayer heard and answered
lavishly,
every morning,

When the idea of juxtapoetizing Mary Oliver’s “Morning Poem” and Mordechai Gebirtig’s “אַ זוניקער שטראַל” (“Sunbeam”) occurred to me I quickly had second thoughts. Gebirtig wrote his poem — which, unlike most of his lyrics, he did not himself set to music — in 1941, while imprisoned in the Kraków Ghetto, along with the rest of the city’s Jewish population. I wondered if it was appropriate to pair a poem so tied to its historical context and its author’s fate with one by Mary Oliver, a celebrated American poet who lived a long life pondering the landscapes of New England. Ultimately, however, I decided that to fence off Gebirtig’s work (or that of any other Holocaust victim) would mean giving in to the tendency of “backshadowing,” and simplifying the poetry as tragic, or even naive. When we place the two poetic meditations side by side, we see a rich tension between the historical and the eternal, the universal and the particular.

Both of our poems begin with an image of morning sunlight. For Oliver, the sun’s “orange sticks” serve as the lighting for the awesome act of creation that occurs with each new day. Gebirtig’s sunbeam is an animate individual with a specific purpose: to herald the coming of Spring, “the king of love.” We can already see a difference in perspective here: Oliver is meditating on something that happens “every morning,” but in Gebirtig, the ray of sun appears to have just fallen on his bed, perhaps for the first and only time, and it’s explicitly tied to one very symbolic season.

Mary Oliver focuses on the imagery of this daily genesis which can be witnessed by all, as one might watch a painter in the studio. Gebirtig, however, is focused not on the beginning, but an end: Springtime is a symbol of “yeshue,” a Yiddish word borrowed from Hebrew with heavy connotations of the coming of the Messiah.

In this contrast there’s an interesting echo of the opposing notions of an ahistorical, universal paganism versus historical, particular Judaism. The sunbeam’s repeated command to Gebirtig — “Get up, man, it’s day already” — does sound like something a Biblical prophet might say. But just “spread[ing] the news” seems like a rather passive task, especially if we remember the situation in which Gebirtig found himself at the time he wrote this poem.

Yet, instead of a call to naive inaction, we can choose to see the sun’s prophecy as a belief that peace, freedom and dignity are somehow possible in this world. Gebirtig’s form of action, like many poets who continued to write in ghettos and concentration camps, was to spread that message amongst his people in a time of horror and pessimism.

Oliver acknowledges that her personal appreciation of each morning’s miracles is not possible for all. She speaks of those, like herself perhaps, whose “nature / [is] to be happy,” and contrasts them with those whose spirits hold “the thorn / that is heavier than lead.” I first read “Morning Poem,” after the very untimely death of a friend who certainly was the type to “swim away / among the soft trails / for hours…imagination / alighting everywhere.” I interpreted “the thorn” as the depression that had so often gripped me and prevented me from truly living. It seemed cruel that my friend should be dead and unable to swim or pray, while I was  alive but ungrateful, barely trudging along. There was great comfort for me in Oliver’s notion that I might be holding inside “a beast shouting that the earth / is exactly what it wanted,” that somehow our purpose as humans is to be happy and hopeful, that our unconscious prayers may have already been answered and fulfilled – while we were sleeping, even.

Again, it almost seems inappropriate to take Mary Oliver’s idea of one’s “nature” as determining their outlook and apply it to Mordechai Gebirtig, whose poetry is elsewhere filled with a despair that was very much caused by the murderous anti-semitism surrounding him in his later life. While “Sunbeam” seems to be an anthem to hope and optimism, the very last line betrays something very bitter. Liberation, freedom, peace and all the joys of Spring are coming “For all, and for you Jews.”

It’s a coda as sharp and heavy as Mary Oliver’s thorn of lead, implying that many Jews had internalized their own dehumanization, forgetting that they are a part of mankind, and will ultimately share in humanity’s collective fate. As heartbreaking as this is, in writing “Sunbeam,” Gebirtig performed his poet’s duty in reminding his audience of their humanity. It’s still good news: our particular and universal destinies, or at the very least the outcome of this sunny day before us, has not yet been written.

A sunbeam settled on my bed,
Beloved spring’s first harbinger,
And gently it begins to wake me.
Get up, man, it’s day already,
The rooster has already crowed!
Spring, the king of love and joy
Is coming from the four corners of the earth.

Get up, man! It is day already,
The sunbeam says —
With warmth, with love and gentle caress.
Go out and spread the news:
Very soon, throughout the forests and fields,
For every bird, man and the whole world,
There will be the long awaited salvation.

Get up, man — it is day already,
The sunbeam says —
With warmth, with love, and gentle caress.
The Spring, the herald of freedom
Will make the fields bloom,
And the world will be bright and free,
For all, and also for you Jews.

— Translated by Benjy Fox-Rosen
with Julie Dawson and Joshua Waletzky

Listen a musical interpretation of this poem by Benjy Fox-Rosen 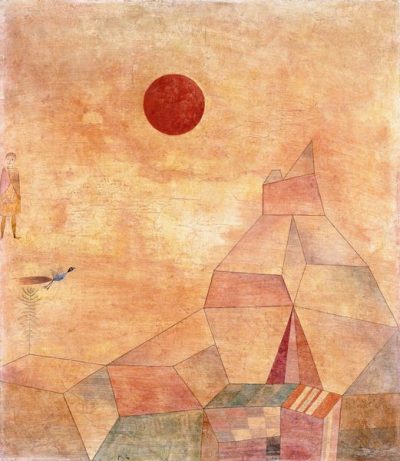 Benjy Fox-Rosen, “A Sunbeam,” from Two Worlds: The Poetry of Mordechai Gebirtig, Golden Horn Records, used by permission of the artist