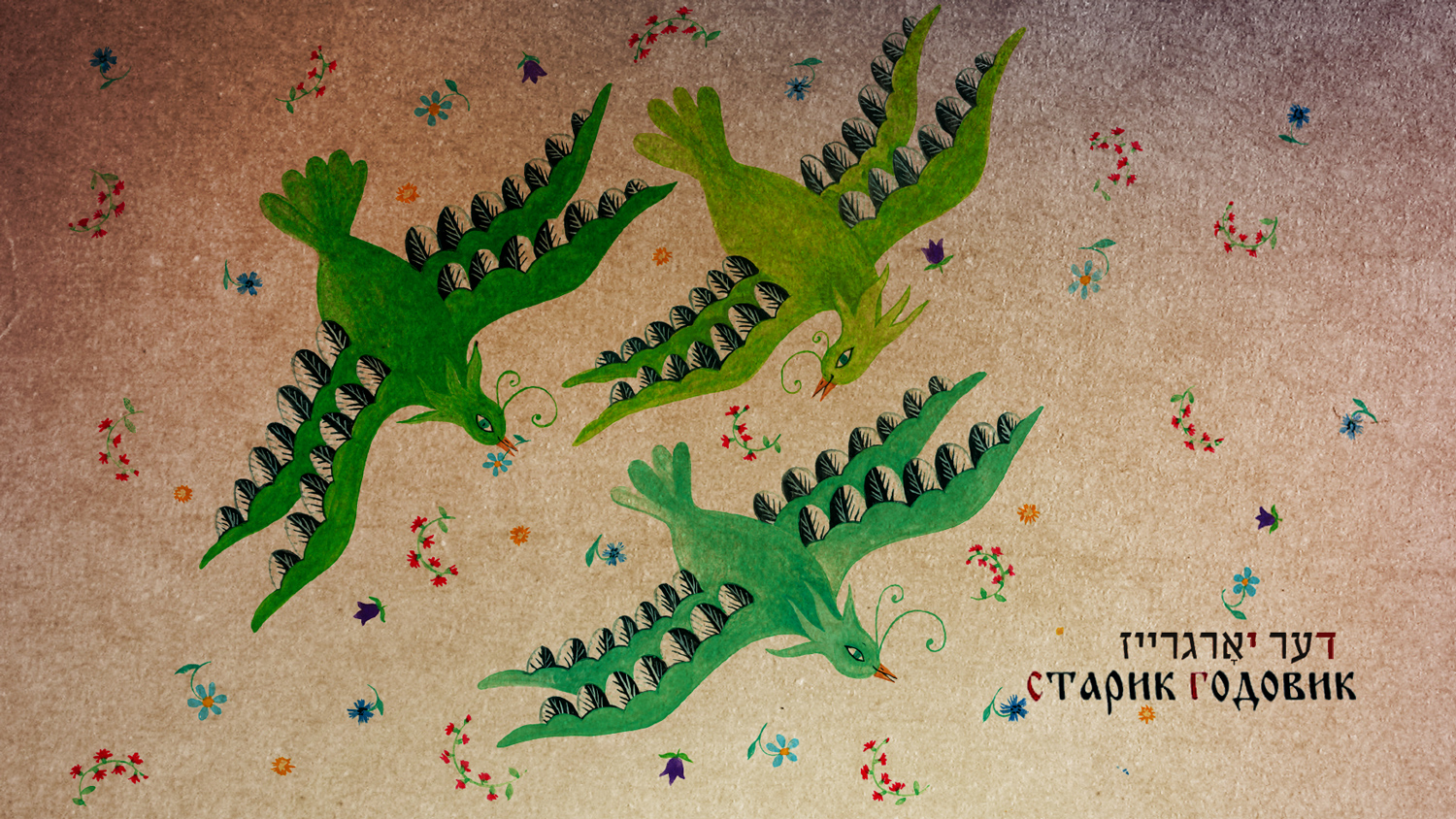 The Vortsman, having migrated from Yiddishkayt to the SoCal Arbeter Ring (Workmen’s Circle) and then gone missing, is back.

Two matters prompt the restoration. One’s an old saw that he won’t let fall from his hands; the other is somewhat more esoteric. (Warning: the latter is quite complicated, though fun, as well.)

As for the first, it’s that tortured matter of how to spell in English the just-concluded eight-day Festival of Light. What had The Vortsman raging, first, was that YIVO, the veritable Academy of Yiddish and early-adopter of an English transliteration standard of Yiddish, brutally betrayed said standard in its year-end fundraiser mailing. Emblazoned on the envelope was the wish for a happy “Chanuka”! Visions of Michele Bachmann saying “tsha-noo-ka” danced in his head, mixed-metaphorically. 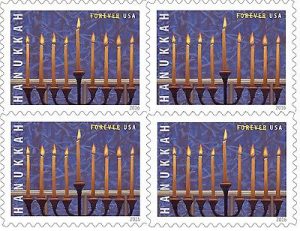 The Vortsman can’t recall if the letter carried the USPS holiday postage stamp in honor of “Hanukkah”!! (No, Michele, it’s not “ha-noo-ka-ka.”)

But what really brought Der Vortsman shir nisht (not quite) into apoplexy was that our own L.A. pillar of Yiddish crumbled: Yiddishkayt, in its new year message, referred to Chanukka!!! (The upset was partly assuaged by information that the spelling was deliberately chosen to awake The Vortsman from wintery slumber.)

[Hypersensitive Editor’s Note: Yiddishkayt’s official style is not invoked to rankle The Vortsman, but rather to use the accepted spellings of Yiddish/Jewish words (as they appear in their Ashkenazic pronunciation) in Webster’s unabridged dictionary. For all other Yiddish words, we use the Romanization system developed by Uriel Weinreich that was later adopted as the standard for YIVO publications, with slight variations for clarity in English-language reading.]

Azoy tsi azoy (thus or thus — whatever), The Vortsman raises again his defiant banner: why isn’t the throat-clearing sound in Yiddish (and Hebrew, for that matter) transliterated into English as kh? Where other languages are involved, our media have no problem: Kharkov, for example, and many names from Africa and India, are spelled azoy.

That doubled “k” in Hanukkah, we’ve been told, is meant to distinguish between the two k-like letters in the Hebrew alphabet: כּ  and ק. Uh-huh. So what’s the excuse for the doubled “n” still seen in the best of Jewish newspapers? Fregt mir b’kheyrem (lit., ask me when I’m in excommunication — beats the hell out of me).

Herewith the call to all right- (or left-) thinking lovers of Yiddish: The festival is called, in Ashkenazic (Yiddish) Hebrew: Khanike. In Sefardic/Mizrakhi/Israeli Hebrew, it’s Khanuka. The Vortsman might consider, as a compromise, Hanuka, but only after a wide-ranging, openly public debate involving the Jewish and general press and, too, the Postal Service… 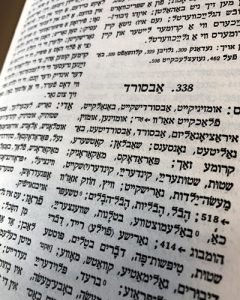 Turning now to the second, somewhat esoteric matter: Yiddish-English translation and neologisms (newly made-up words). Der Vortsman, as some readers may know, is a professional (he gets paid real money) Yiddish-English/English-Yiddish translator (résumé available on request). Still, unlike the unbelievably talented interpreters at the U.N. — who listen in one language and simultaneously speak in another —  he is often at a loss encountering unfamiliar Yiddish words, as well as very many technical, legalistic English terms he hasn’t the slightest idea about how to render into Yiddish.

In both cases, dictionaries are his refuge. In addition to those published from 1898 (Harkavy) through 1968 (Weinreich), two recent publications come to his aid. There’s the 2013 Comprehensive Yiddish-English Dictionary (Beinfeld, Bochner, eds.), based on the 2002 Yiddish-French work of Yitskhok Niborski and associates. Now, there’s also the Comprehensive English-Yiddish Dictionary (2016, Viswanath, Glasser, eds.), based on the voluminous research of Der Vortsman’s friend and army-buddy, Mordkhe Shaechter, z”l.

That’s enough info, we hope, for readers to find and buy those books.

However, sometimes even an exhaustive search (including Nokhem Stutshkof’s indispensable der oytser fun der yidisher shprakh — Thesaurus of the Yiddish Language) comes up with a nekhtiker tog (a yesterday’s day — zero). 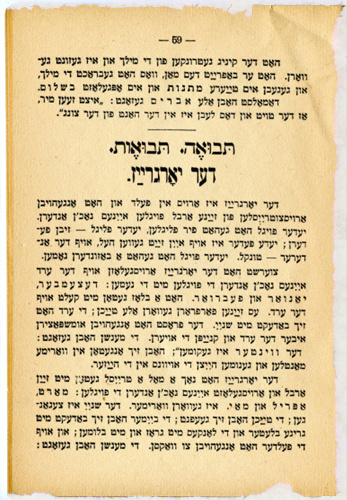 This problem arose recently when the Yiddishkayt’s recent MonsaMonster provided a link to a literary textbook for children in U.S. supplementary secular Yiddish schools (Der Onfanger — The Beginner), by Yankif Levin. It contains a story titled der yorgrayz, about a supernatural being who seems to control the turn of the seasons. Yorgrayz? Hey, dictionary-loaded shelf of mine, what does that mean? The shelf was silent; embarrassed, perhaps.

A clue came in the book’s inhalt — Contents. It noted that the story came fun rusish — from Russian. Der Vortsman, Slavicly-impaired, turned to his Russian-English-Russian dictionary (Oxford, no less) and, since Levin’s Germanic-based Yiddish term seemed to be made up of the stuck-together words for “year” and “old,” came up with god starosta (applying the YIVO Standard to the transliteration, of course).

As in all things Slavic, Der Vortsman turned for confirmation to a real expert, Rob Adler Peckerar, Executive Director of Yiddishkayt. True to the PhD that Rob secretes, he quickly provided a range of possibilities, including the best one, “sedoye vremya, almost literally ‘tsayt-grayz,’ the grey old man of time.”

But had Levin changed the Russian “time” to the Yiddish “year?” Der Vortsman was content to think so and let it go at that. Not Rob, though. He “asked around” (genishtert un gegriblt zikh — searched and investigated, i.e., researched) until he came up with the full story…and more.

We’ll let him tell it, as The Vortsman takes his well-earned back seat:

“The story in the Levin book is adapted from a story called Старик годовик [Starik Godovik]. The title of the Levin story, yorgrayz, is a literal (backwards) translation of the Russian title: starik is an old man and godovik is more difficult to translate, it is something like Year-man. The original is a folk story collected by the nineteenth century Russian folklorist Vladimir Dal’.

“For your viewing pleasure, here’s an animated version of the story and the cover of a recent publication of the book.”

Thank you, Rob. Der Vortsman is truly in awe, as usual.