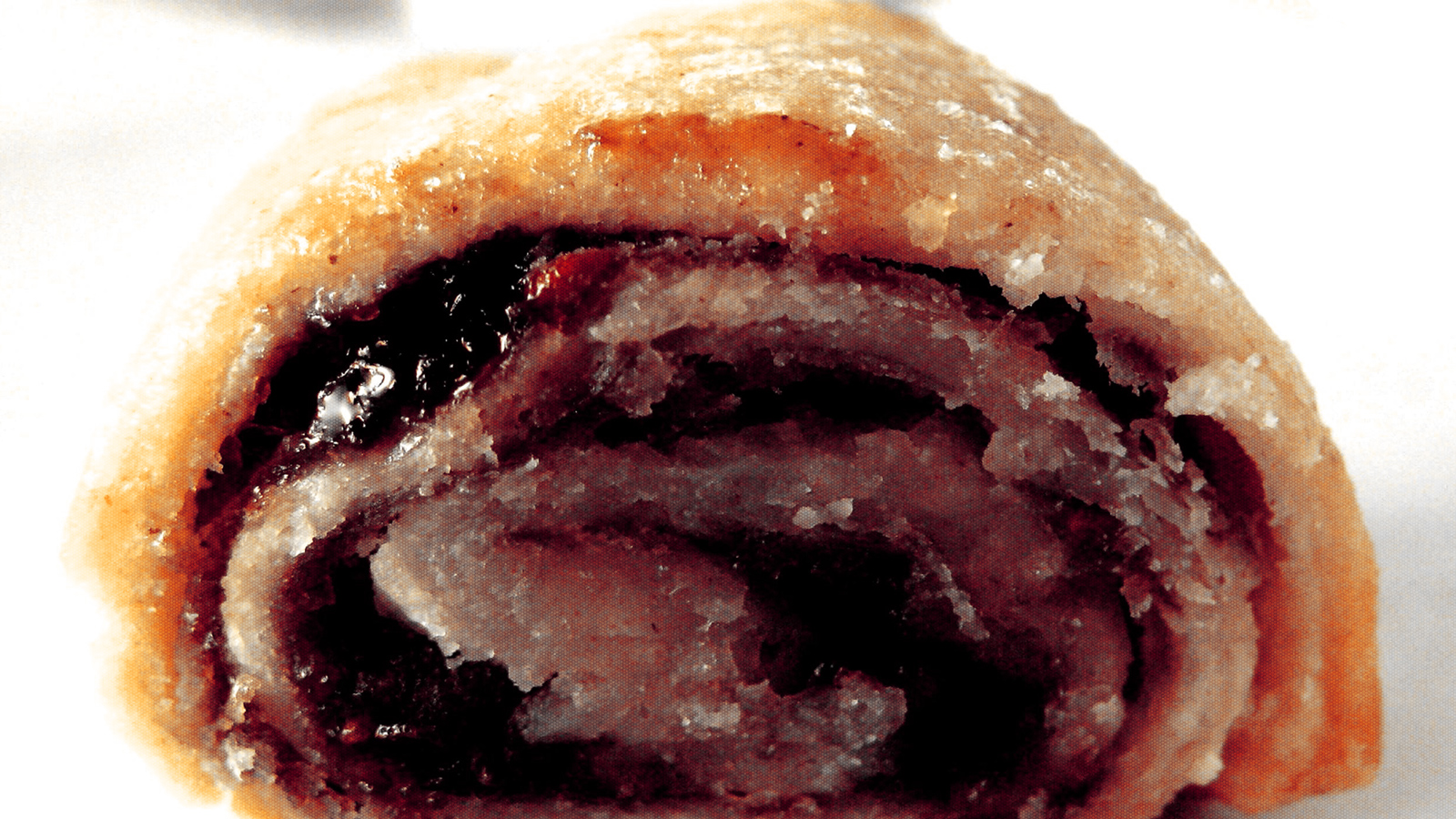 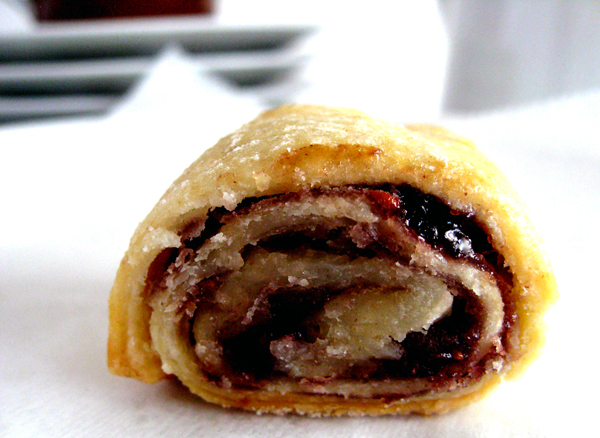 Seems the OED recently added to its vast store of words. As a Jewish publication in England put it: “The joys of Yiddish pastry have finally come to the attention of the custodians of the nation’s linguistic heritage…Rugelach…is one of the new additions announced by the OED…Note that rugelach appears only in a plural form. For who ever ate them in the singular?”

Der Vortsman meant to take this up with the Royal Couple during their recent L.A. visit, but, somehow, their people couldn’t reach our people…Anyway, here’s the disparaging word for the OED:

We’ve frequently heard the Yiddish-impaired ordering “roo-guh-latch.” Really! The fault lies not in their stars, but in that Germanic rendering of what are, in fact, rogelekh. The crime was committed originally by the sign makers who supply retail bakeries, but to have it compounded by the OED…! Oh, and by the way, ye arbiters of All Things English (ATE?), dieters everywhere need to know that a single pastry of this type is a rogele.

Should our English cousins fail to respond, Der Vortsman will mount his trusty steed (named Prius) and gallop through ev’ry Middlesex village and town, decrying this travesty upon a defenseless but resistant language.

BREAKING NEWS: Hardly had the above been keyboarded than the L.A. Times, in a July 13 feature on Canter’s Deli, used the lame Germanic “rugelach.” Upon receipt of an advance copy of this column, reporter Nita Lelyveld was kind enough to write back: “Thanks…I’ll pass it on – but rugelach is our style here, I think. Your column looks very interesting. Glad to get a glimpse of it!”

On a much smaller scale (a newspaper in Northern NJ), a reporter wrote: “‘naches‘ is the Yiddish word meaning ‘pride in one’s children.'”

Retorted Der Vortsman in an email:

Actually, the word is Hebrew in origin — as are about 30% of Yiddish words – and means ‘prideful enjoyment,’ not limited to one’s progeny (e.g., winning a Pulitzer prize oneself might call forth that emotion).

Too, the recognized way to transliterate the word is ‘nakhes,’ which eliminates the possibility that it might be pronounced like the Southern U.S. city.

Then, too, Der Vortsman — in response to a query sent to Yiddishkayt’s founder – waded into matters ecclesiastical as well as linguistic. Talk about taking on the powerful!

The issue was a ksuve (aka ketubah, marriage contract) which a female rabbi had helped a wedding couple to write in English, Yiddish and Hebrew. When the document came back from the calligrapher (“the official ketubah maker”), that worthy had, in the Yiddish section, changed the rabbi’s title “Rav” to rebetsin!!

Wrote the inquirer: “I thought that was the word for a rabbi’s wife – is it also used for a female rabbi?  What would be the correct term?”

Here’s what Der Vortsman had to say:

Rebetsin means a rabbi’s wife. Actually, this is not so much a question on Yiddish usage as it is an ecclesiastical one – and there I have no expertise beyond that as a bemused observer.

The ordination of women as rabbis is a relatively recent development in Jewish religious life and does not exist in Orthodoxy.

The two main sources of innovation and neologism in Yiddish are the Secular Yiddishist/academic wing and the Orthodox/Hasidic (khsidish) world. Neither one has any weight in the branches of religious Judaism that ordain women. Accordingly, none has had the need to create a Yiddish term for female rabbis.

As a Secular Yiddishist and avowed feminist, I would have no problem with designating an ordained woman rabbi as “Rav” or “Rebe.” The ksuve scribe (ketubah is the Sefardic/Israeli pronunciation), obviously Orthodox, is trying to impose his disdain.

Der Vortsman went on in this vein, but we’ll spare our readers further controversy.

Finally, we must report, sorrowfully, that rigorous academic research has deprived Der Vortsman of a previous (decidedly minor) spot in Yiddish history. For over six decades, he’s regaled whoever would listen with the “fact” that he was in the first U.S. Yiddish college class, taught by the legendary Max Weinreich at City College of New York in 1947. He’s waved around the photo of the class that YIVO reproduces regularly in its fundraising newsletters.

Comes now Henry Sapoznik, new Director of the Mayrent Institute for Yiddish Culture at the University of Wisconsin, Madison (where he’s just concluded a summer KlezKamp), with the following earth-shaking discovery:

“The course was taught by a Prof. L.B. Wolfenson who was a professor in the Semitics and Hellenistic Greek Dept….The course description says ‘he has a thorough knowledge as to the literature and conversation of Yiddish…’  A review states that the seven students in the class already spoke the language or had heard it spoken frequently. I will see if a syllabus turns up anywhere.”

The place: UW, Madison. The year: 1916!! A full 31 years before Der Vortsman and his fellow-students thought they were making history.

(Readers who’d like a copy of that CCNY Yiddish class photo may request it. It’s no longer an eBay item.) 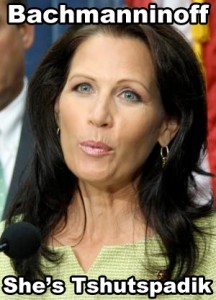 LATEST BULLETIN: GOP hopeful Michele Bachmann (R-MN) has provided the strongest argument yet against those who insist that the “traditional” (i.e., Germanic) method of transliterating Yiddish words is preferable to the YIVO Standard, “because that’s how people talk.”

In a TV interview last week (picked up by The Daily Show’s Jon Stewart) Bachmann slammed President Obama for his “tshutspa.” Commented the flabbergasted Stewart: “She’s talking out of her ‘tutshes.'”

(Editor’s inclusion: Click here to see the video. (NSFW if you work in an office where Yiddish pronunciation is important, such as mine).

Der Vortsman is Hershl Hartman, long-time Yiddishkayt Board Member and Education Director at the Sholem Community.