Of Words and Wars

Of Words and Wars

Now that the 2012 campaign is in full swing (az okh un az vey — o and woe), the Vortsman is keeping his eye on the misuse of Yiddish (or Yinglish) in the media. 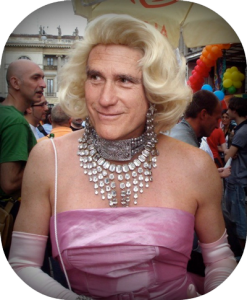 A recent report on the assumed GOP candidate said: “When told that if he doesn’t switch ties, he’ll be perceived as wearing the same thing two nights in a row, Romney says, it’s fine with him, he’ll ‘look like a schlep.’”

Even if we were to put aside our insistence that Yiddish words not be transliterated as though they were German (fat chance), the writer of the report should know that the noun derived from the verb shlepn—to pull or drag—is shleper—disheveled person, in that state due to low-paid hard (dragging) labor or, sometimes, simply to poverty.

No chance that the assumed standard-bearer would ever fit those descriptions regardless of the ties to which he’s bound.

The matter of spelling—in Yiddish this time—came up in a query to the Vortsman about the rendition of the Hebrew/Yiddish word for “moon” in “Zibetsn Levones (Seventeen Moons),” a poem by Yankev Glatshteyn (aka Jacob Glatstein in some circles). Glatshteyn spells the word in Yiddish transliteration: l-e-v-o-n-e-s (in the equivalent Yiddish letters, of course). The usual practice was and remains to keep the Hebrew spelling of words derived from Hebrew and Aramaic. Thus, the poet should have spelled it l-v-n-u-s (lamed,veyz,nun,vov,sof).

How come? The usual answer is that there’s a “red plot” afoot. Don’t be fooled by that Fox News approach. True, in Yiddish publications under Soviet rule, Hebrew-origin words were transliterated as above. In addition, them Red Rooshins eliminated the five final letters in the Hebrew/Yiddish alphabet. So Glatshteyn was a secret commie agent? Not on your life. 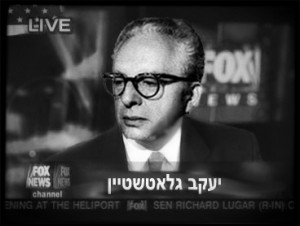 Starting early in the 20th century, Yiddishists were concerned that their potential readers among young people, having had a secular education rather than the traditional Hebrew religious training, tried to find more “accessible” forms. The great classic author Y. L. Perets even proposed, in 1908, that Yiddish be “romanized,” that is, written with Latin characters. A compromise developed in the 1920s—the one Glatshteyn followed in the cited poem. Hebrew-origin words would be transliterated, but the horror of the Soviet five-letter execution would not be tolerated. In fact, not a single Yiddish publication around the world—pro- or anti-Soviet— jettisoned those five final letters.

However, the use of transliteration continued through the mid-40s, when post-khurbn (Holocaust) writers and publishers returned to traditional spelling.

Another reader asks about the meaning of mir—me (or we)— in such phrases as zay mir gezunt, hob mir a gutn…Literally translated: “be (for) me well, have (for) me a good…

The reader went on to opine: “mir, I assume is dative case. Could ‘with’ be understood?”

Said the snarky Vortsman: “Since mir follows the (understood) preposition far—for, I guess that makes it dative—though I much prefer the non-Latinate term, ‘indirect object.’” 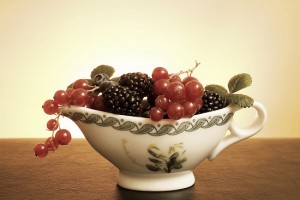 Lest this start a grammarians’ war, let us hastily turn to a word that only seemed to be war-like: kriglekh. It occurs in a song about his childhood by Morris Rosenfeld, recently heard on the net’s “Yiddish Song of the Week,” presented by the An-Sky Jewish Folklore Research Project. One couplet reads: “hit zikh, nit tsebrekht di kriglekh, ruik, makht kayn gvald; Veyst ir vu di yagdes vaksn, in dem tifn vald?”

The knowledgeable director of the Project gave this translation:

“Be careful not to break our armaments, quiet, make no noise. Do you know where the berries grow in the deep woods?”

The Vortsman, a devoted listener, commented on-line about the rendering of kriglekh into “armaments,” suggesting that the poet intended “little jars,” the plural diminutive of krug—jar or pitcher. This was disputed by a long-ago friend who noted that the poem described a kids’ “war game,” so “armaments” might be correct. To which the Vortsman replied that the context, “…where the berries grow…” supported his position. 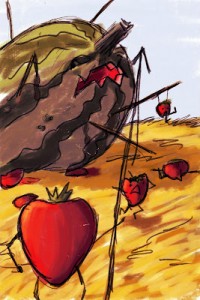 The dispute sent us to the bookshelf and some fascinating discoveries. Alexander Harkavy’s dictionary of 1898 shows krig only as the plural of krug. His 1928 Yiddish-English-Hebrew version has six krig entries relating to war and quarrels. Uriel Weinreich’s Modern Yiddish/English dictionary increases the total to ten. Nokhem (Nahum) Stutchkoff’s magisterial Thesaurus—the Supreme Court in these matters—shows krig only in the categories relating to war and quarrels, while krigl appears only under keylim (dishes, receptacles) where krug is also found.

We have often drawn attention to Stutchkoff’s two-plus columns of terminology for weaponry (vofn) to demonstrate how far Yiddish is from being a “kitchen language.” Needless to say, kriglekh doesn’t appear there.