The flow of inquiries from YidBits readers has slowed to a trickle — that’s not a Yiddish word, though it sounds like one . We might conclude, optimistically, that all our readers have had all their questions answered. 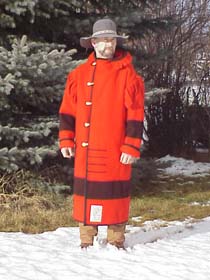 Or, pessimistically, that there aren’t many readers out there.

However (in Yiddish: tsurikgeredt – reverse-talk), Der Vortsman can depend on true linguists in academia, loyal readers, who are always ready to comment on his meanderings and offer helpful advice that becomes grist for this column.

So it was with last month’s discussion of the long coats worn by both ultra-Orthodox Jews, called ka•PO•tes in Yiddish, and by Anglo-Saxon pioneer-era re-enactors who call them cap-OATS in English.

We surmised that the word came from Latin to French and into Yiddish, where the accent shifted. Not quite so, an academic linguist emailed: the direct source of the Yiddish word, and its accented second syllable, is Polish. Once again, we stand corrected and, thereby, informed.

In the course of that e-exchange, Der Vortsman used the term mishteyns gezogt and inquired as to its origin. Herewith the learnèd reply, translated into English: 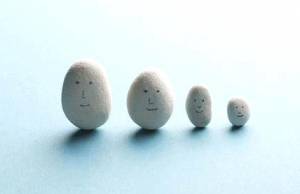 ‘mishteyns gezogt,’ which is now used as a means of dismissing something, was apparently an earlier synonym of ‘nebekh’ or ‘nisht do gedakht’ (see below*).

It stems from ‘dem shteyn zay es gezogt,’ i.e., may it be spoken to (directed at) a stone, not at us.

Tsurikgeredt, the YidBits editor pointed us to Alexander Harkavy’s indispensable Yiddish-English-Hebrew dictionary, which gives the same sympathetic meaning but adds, in a footnote, that the expression is “possibly an erroneous” transfer into Yiddish of the Polish niestety (alas), [na] nieszczęście (unfortunately). Hmm, there’s that Polish connection again. So, how did a term of sympathy (he’s sick; it’s a pity) turn into one of dismissal (he’s sick; you call that a sickness)? We’ll leave that one to the socio-linguists.

Meanwhile, Der Vortsman seized upon an opportunity to assist an academic linguist (not involved with Yiddish) who asked for back-translations of three Yiddish sayings that she had only in an English text. This was for an elementary school project called Stories of PLACE (People, Language, Art, Culture, Environment). 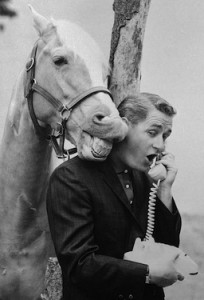 The three sayings were:

“If a horse had anything to say, he would speak up.”

“Light is especially appreciated after the dark.”

“Trees bend only when young.”

The first of those was found in Nokhem Stutshkof’s magisterial Oytser – Thesaurus – of the Yiddish Language; we stabbed at re-rendering the other two.

Is there anyone out there who knows the actual Yiddish sayings and can provide sources? Both linguists and mentshn fun a gants yor – year ’round people, i.e., common folk – are welcome to weigh in.

Finally, back in the Dark Ages of this column, we had opined that “tweet,” the then-new word in cyberspace, had a Yiddish cognate: tsvistshe. Now that Yiddishkayt is on Twitter (are you a follower?), we noticed that the Twitterer-in-Chief (the Twit?) uses tsvitshe. Compare the two carefully.