This month’s column might be headed shtiklekh un breklekh — bits and pieces — a return to our previous style before long-windedness set in. 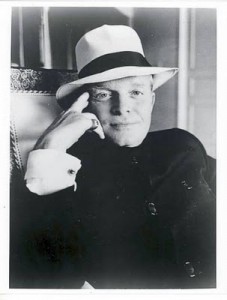 A dear friend’s family is deeply involved in such backwoods outdoorsy activities as week-long pioneer-era re-enactments called “rendezvous.” The long coats they wear are called capotes, pronounced “cap-oats.” Hearing of this, Der Vortsman smirked that, somehow, these 100% Yankees had adapted the Yiddish word, קאַפּאָטע [ka-PO-te], the name of the long black coats worn by khsidim (Hassids, as the media call them) and other Orthodox Jews. 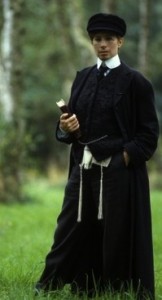 Turns out that ye olde Vortsman was talking through his kapelyush (hat).

A quick search revealed that the Latin word “cappa” means “cloak” and came into English as “cape,” via the French version, “cap.” Further, the French word “capote” means a long coat, so it was obviously taken into Yiddish with no other change than a shift in the accented syllable. Gey veys — who knew?

A question posed in Yiddish via the new director of the SoCal Arbeter Ring (Workmen’s Circle) asked:

How do you spell the “Hebrew” word khoyzek in the Yiddish expression khoyzek makhn — to make fun of someone or something? (By itself, a khoyzek can denote a mean-spirited parody or something obviously foolish.

Turns out that, while the word is spelled (ח – ו – ז – ק) as though its origin were Hebrew or Aramaic, it does not exist in the lexicon of loshn-koydesh (the holy tongue).

In his famous Yiddish dictionary, the late, great Vortsman Alexander Harkavy opined that khoyzek derives from Old High Germanic hosc or Middle High Germanic hosche ‘mockery,’ an opinion supported by the other venerable vortslayt of his day —Ed.

A close relative, who still retains the ability to read Yiddish thanks to her training in a secular Yiddish shule (afternoon school), wanted to react to an article I’d sent her by saying “very cool” and asked how that would be said in mameloshn.

“If Yiddish were to keep up with the distortions of pop-English (why on earth would it?) it might say gants kil — quite, or very, cool. The uncool version would be zeyer sheyn — very nice.”

A nearby neighbor emailed:

“My father used to use a Yiddish word to describe psychic energy/inner resolve…It sounded like keckas.” 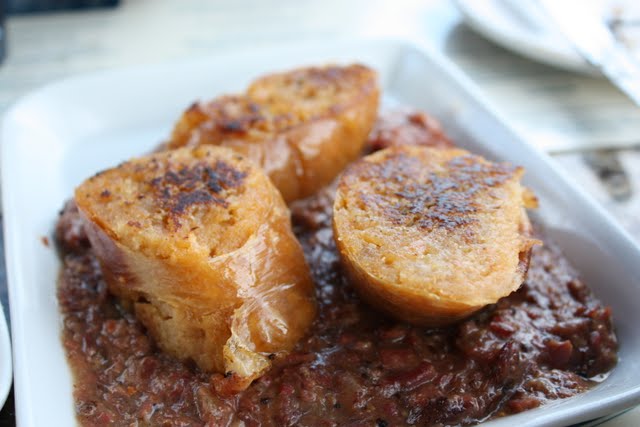 Could it possibly have been kishkes? That’s the all-purpose Yiddish word for guts, innards, AND it can also refer to inner strength. (Stuffed cow’s kishke is, of course, either a delicacy or an acquired taste, depending on one’s upbringing.) Genteel usage refers to the dish as “stuffed derma.”

A very prestigious — and deservedly so — organization dedicated to the survival and promotion of Yiddish sent out an email message in English listing the website addresses of useful sources. It added, in correctly transliterated Yiddish: “Tsu onkukn di inhaltn, git a kvetsh af…”

Torn between laughter and tears, Der Vortsman advised the sender that the first part of the phrase was an unfortunate, literal, word-for-word translation of “To view the contents…” and suggested these alternatives that are Yiddish in both syntax and feeling: “kedey tsu zen dem inhalt…” or “tut a kuk af dem inhalt…” The worst error had been to render “contents” into a non-existent Yiddish plural; inhalt covers both singular and plural.

Finally, that Word-of-the-Day thing on the internet advised its subscribers (9/25) of this word:

“TCHOTCHKE|CHOCH-kuh|, noun: A trinket; a knickknack.”

“Tchotchke is from Yiddish tshatshke, ‘trinket,’ ultimately of Slavic origin. It is also spelled tsatske.”

Leaving aside the messed-up transliteration, let us note that Yiddish dictionaries differ on how the word for “trinket” is spelled — and the citations would get us into long-winded disquisitions or dissertations. Suffice it to say that Yinglish — and the internet thing quotes several examples from Yinglish literature — is not always true to the original Yiddish meaning.

Der Vortsman is Hershl Hartman, long-time Yiddishkayt Board Member and Education Director at the Sholem Community.