Yiddish in the News

Yiddish in the News as the Year Turned

The last days of 2011 included both triumphs and tragedies for our mameloshn (mother tongue).

A badly-headlined but well-written Huffington Post feature — printed around the world — detailed the revived interest in Yiddish and its culture on college campuses throughout North America. (The AP writer later assured The Vortsman that she’d check out this newsletter.)

The highly respected New York Review of Books, in an article on strange places, included Birobidzhan, the Soviet-created Jewish Autonomous Region, whose official language was Yiddish, “the only place in history where this was ever so,” including the fact that 150 Yiddish teachers have been trained there in the two decades since the Soviet Union was dissolved. 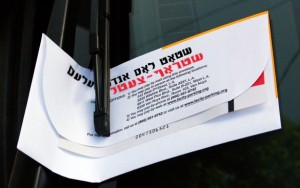 Actually, The Editor notes that Yiddish was also an official language of the Byelorussian Soviet Republic from its formation soon after the Bolshevik revolution, along with Belarusian, Russian, and Polish. And, believe it or not, Yiddish is, since 1999, an official minority language in—no, not Israel—SWEDEN!

In Belarus in 1926, Jews were the second largest national group and 90.7 percent of those 407,000 people declared Yiddish as their mother tongue. Then, many administrative forms were printed in Yiddish, along with the other three languages, including police citations. (Please don’t ask Der Vortsman how one might say “overtime parking” in Yiddish.) 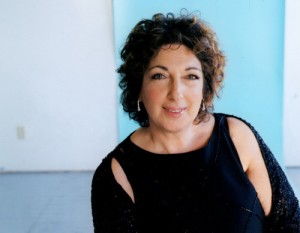 Tragically, Yiddish song and culture lost one of its most talented and dedicated figures with the premature death of Adrienne Cooper (Dec. 25). Der Vortsman cherishes his many (non-musical) collaborations with her. Readers may click HERE to see and hear her singing many songs, and might wish to obtain some of her many CDs, including our favorites: In libshaft un in gerangl — “In Love And In Struggle: The Musical Legacy of the Jewish Labor Bund,” and “Ghetto Tango.” 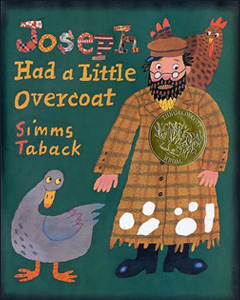 On the same day, the renowned and honored children’s book creator Simms Taback left our midst. His book Joseph Had a Little Overcoat which was twice awarded the prestigious Caldecott Medal, includes faux clippings from Yiddish newspapers. It is based on the Yiddish folksong, “hob ikh mir a mantl,” which Simms might have learned in kindershul No. 1 in the Bronx, or from his Yiddish-speaking parents. (For a more detailed description of Simms’ Secular Yiddish background, including the origin of his unusual name, readers may contact Der Vortsman.) 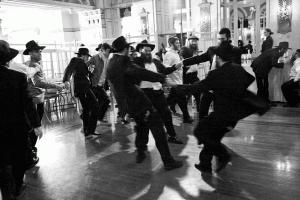 Returning to that AP feature, it led with a verse being sung by students of Yiddish at Emory University in Atlanta and used perfect YIVO transliteration:

Az der rebe tantst, tantsn ale khsidim! In English, the lyrics mean: ‘When the rebbe dances, so do all the Hasidim.’

The Vortsman, in his often-irksome way, informed the writer that:

“The lyrics quoted…are the frequent misunderstanding of the original misnagdish (originating from opponents to Hasidism) version, which has his followers outdoing whatever the rebe does. Thus, ‘az der rebe tantst, shpringen ale khsidim‘ – when the rebe dances, all the Hasidim leap. In other verses: eats/gorge, speaks/shout, sleeps/snore, etc.” (For our readers: est/fresn, redt/shrayen, shloft/khropen.)

And, while AP hewed to the YIVO Standard, other forces in our culture (including YIVO!!) strayed.

Given the (too) many versions of transliterating its name in the public arena, it was somewhat heartening to see that the United States Postal Service had made “official” the spelling on its annual festive postage stamp in two lines of type: “HANU|KKAH.” (No explanation for the double “k,” but at least the Germanic “Ch” was gone. Don’t look a khanike gift-horse in the mouth, said we.) 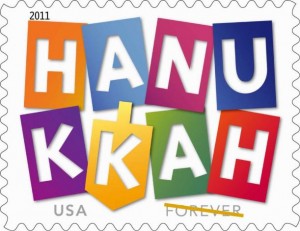 Of course, a holiday supermarket ad was headlined “Happy Chanukah” while a product within the same ad used…the Postal Service’s version.

Then came the holiday light(ning) bolt: The khanike fund appeal from the YIVO Institute for Jewish Research, on both its envelope and the letter inside, wished supporters “a freylekhn Hanukkah!” YIVO, of all institutes!

The Vortsman’s in-box soon filled up with both angry and bemused responses. “How could they…” Our guess is that YIVO heard similarly from dozens if not scores or hundreds, because a few days later came an e-mail fund appeal from YIVO, headed: “Wishing you and your loved ones a freylekhn khanike…”

There’s more. The rest of that greeting reverted to Modern Hebrew and abandoned the Standard: “…and chag sameach.” We’ll leave it to YIVO to explain how that phrase is to be pronounced, or why German is the “standard” for transliterating Hebrew. 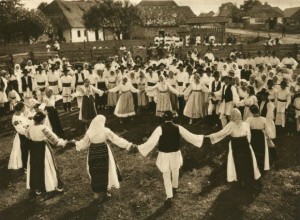 Finally, while continuing the post-khanike theme, we revert to the primary purpose of this column: replying to readers’ queries. A multimedia journalist, preparing to sing the original Yiddish text (by M. Rivesman) of “khanike, oy khanike,” was stumped by the meaning of the last word in the line: un lomir ale tantsn in kon. A khosid (Hasid) had opined that “it should be GAN, the garden.”

S’hoybt zikh nit on — no way (lit., “It doesn’t even have a beginning”). The only time Yiddish uses the Hebrew word “gan” is in gan-eydn — the Garden of Eden, heaven — and in the related, rarely-used term gan-eydn hatakhtn — the lower heaven or paradise on earth.

May the new year bring us all more dancing and less sorrows!

Der Vortsman is Hershl Hartman, long-time Yiddishkayt Board Member and Education Director at the Sholem Community. You can write the Vortsman at info at yiddishkayt.org.
The Vortsman Yiddish Language No Comments
Share Tweet Share Pin
Look Ahead! Support Yiddishkayt Today