Zmitrok Biadula (Shmuel Yefimovich Plavnik) was born on April 23, 1886 in the small White Russian town of Pasadziec, (today Пасадзец, Belarus). His father worked as a forester and tenant farmer and taught his son to read before  sending him to study in Jewish schools.

At 13, Biadula began writing Hebrew poems based on medieval liturgical poetry. Later he discovered the  possibilities of Belarusian as a literary language. Expelled for writing poetry, he never finished school. 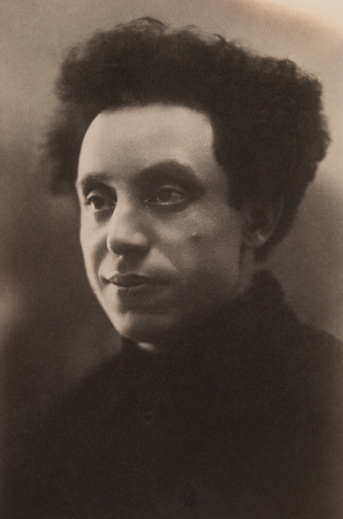 Biadula began writing in Belarusian in 1910 and published his first work, “The Outrageous Groom,” that same year. He wrote primarily for Наша Ніва (Our Field), one of the earliest Belarusian-language newspapers, which covered a wide variety of political, cultural, and economic topics and helped usher in a new Belarusian literary language. Published in Vilnius, the newspaper was originally printed in two editions using the Cyrillic and Latin alphabets respectively. There Biadula worked alongside the leaders of Belarusian cultural production, including Janka Kupała, Jakub Kołas, and Maksim Bahdanovič.

Biadula first worked as a secretary for the newspaper and then joined its editorial staff in 1912. Before the October Revolution, there were very few cultural ties between the Belarusians and the Jews and, as one of the creators of Belarusian literature, Biadula represented a rare phenomenon.

Along with the masses of Jews, Biadula was attracted by new opportunities in education and in the development of the national cultures of the former Russian Empire’s minorities in the aftermath of the Bolshevik Revolution.  In 1919 he authored a brochure entitled “Жыды на Беларусі” (Jews in Belarus), and also wrote about the relationship between life and art. Following Biadula’s lead, a number of Jews became involved the Узвышша (Summit) literary movement of the 1920s and 1930s. Biadula’s poems were published in two collections: Пад родным небам (Under Our Native Sky, 1922) and Паэмы (Poems, 1927). In 1934 he became a member of the Union of Belarusian Writers. In his later years, he turned almost entirely to prose and published a number of novels, stories, and children’s books, as well as an autobiography. He also translated many Yiddish, Russian, and Ukrainian work into Belarusian.

Biadula was also political activist and in his writing he frequently appealed to Jews to join in revolutionary activities and help the Belarusian independence movement. In his fiction, Biadula depicted the everyday life of small town people and their struggle for social justice. He died in Oral, Kazakhstan as Jews were being evacuated from Belarus following the Nazi invasion on November 3, 1941.

And here’s a clip of Daniel Kahn, Psoy Korolenko, with Oy Division singing the same, a bit more raucously and multilingually.

The Yiddish verses being sung here were written by Chaim Zhitlovsky.