Dr. Chaim Zhitlovsky was born on April 19, 1865 in the small town of Ushachy (today: Ушачы, Belarus) and was raised in Vitebsk. On his thirteenth birthday Chaim made the acquaintance of Shloyme Rappaport (S. An-sky) and a life-long friendship developed between them.  Zhitlovsky and Ansky both became involved with Russian revolutionary circles.

Under the influence of the Russian revolutionary movement, Zhitlovsky began to advocate for Jewish assimilation until the anti-Jewish pogroms of 1881 made him reverse his position. Zhitlovsky then championed the cause for Jewish national equality and social and political rights, which became known as Diaspora Nationalism.

In 1888 he left Russia to study in Berlin. He was expelled from Germany under the anti-Socialist law and headed to Switzerland, where he received his doctorate in 1892 from the University of Bern. In 1893, Zhitlovsky formulated his theory of Diaspora Nationalism in a book called Еврей к евреям (A Jew Speaks to Jews). 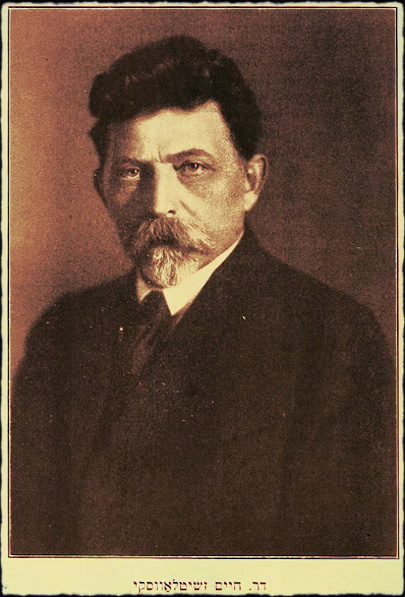 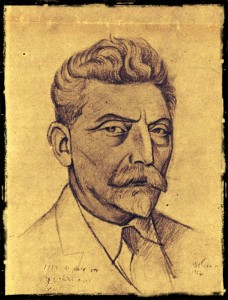 Sketch of Zhitlovsky by H. Ber Levi, as published in the Warsaw weekly magazine “Literarishe Bleter” in 1927.

In late 1893, Zhitlovsky co-founded the Union of Russian Socialist Revolutionaries Abroad, which was later reconfigured as the Russian Socialist-Revolutionary Party. His purpose was to create a revolutionary literature in Yiddish, beginning with the Communist Manifesto. Zhitlovsky wrote an introduction entitled “Yiddish—Why?” in which he expressed the belief that the rebirth of the Yiddish language and literature would lead to the national and social awakening of the Jewish people. When the first Yiddish daily in Russia, the St. Petersburg Fraynd, was founded, Zhitlovsky, under a pseudonym contributed a series of articles entitled “The Jewish People and the Yiddish Language.”

In 1898 he became a member of the Jewish Socialist Bund and his essay “Zionism or Socialism,” laid the groundwork for the party’s program of Jewish national and cultural autonomy. In 1903, partially in response to the Kishinev pogrom, Zhitlovsky revised his Jewish program and joined the Territorialists, a movement to establish an autonomous settlement of Jews in a sufficiently large territory, of which Palestine was considered one of the possibilities. 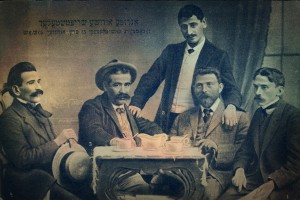 In 1908 Zhitlovsky settled in New York and founded a publishing house which issued the monthly, Dos Naye Leben. Under Zhitlovsky’s editorship, the paper exercised great influence on Yiddish culture, literature, and the development of free socialist thought. That same year, he attended The Yiddish Language Conference in Chernovitz, where, as one of the chairs of the conference, he was instrumental in pushing for the declaration of Yiddish as “a national language of the Jewish people.” After the conference, Zhitlovsky returned to the U.S. where he began his efforts to found Yiddish secular schools in America.

In 1927 Zhitlovsky wrote an essay entitled “Yidn un Yiddishkayt” (“Jews and Jewishness”), which sought to define the secular essence of Yiddishkayt. This essay differed from his previous writing in the use of “social scientific” notions of race and racial traits to conceptualize what he believed constitutes Jewishness in a non-religious context. Furthermore, the essay adopted the mystical Jewish concept of the “pintele yid,” the theory of an innate Jewishness embodied by a “Jewish spark.”

Zhitlovsky helped found the Yiddish Culture Society in September 1929. The purpose of the organization was to unite all adherents of Yiddish to enable them to work in common for the development of Yiddish education and culture. From 1936 until his death in 1943 he moved closer to the radical, pro-Soviet groups active in the Jewish community in the U.S., such as IWO (International Workers Order), IKUF (Yidisher Kultur Farband -Yiddish Culture Society), and ICOR (Association for Jewish Colonization in Soviet Union). Chaim Zhitlovsky died in Calgary, Canada, May 6, 1943, while on a lecture tour for the IWO.

Here’s an interview with the late Itche Goldberg, then 101 years old, about his life in the secular and leftist Yiddish movement in Poland and America: