Moyshe (Moissaye) Olgin was the adopted name of Moyshe Novomisky, was born on March 24, 1878 in a small shtetl near Uman called Buki, about 90 miles south of the provincial capital in Kiev.

He received a traditional education in Hebrew and went off to study at the University of Kiev in 1900.

He was active with a student revolutionary group known as פרייַהייַט (Freedom), which developed into the Kiev branch of the Jewish Labor Bund. His writings for Jewish and revolutionary publications earned him moderate fame among Russian Jews. 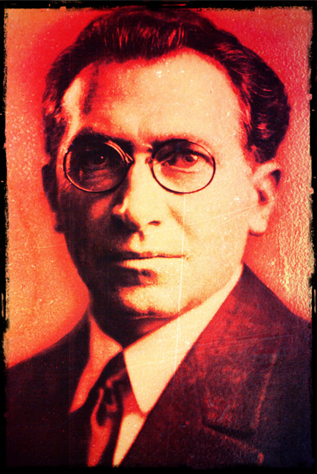 In 1901 Olgin became a leader of the student group of Bundists. The tsarist regime ordered his arrest in April 1903 on a charge of organizing Jewish self-defense groups against anticipated pogroms. In 1904, Olgin left the University of Kiev and went to Vilna as a member of the Vilna Committee of the Jewish Bund. There, he became a member of the editorial board of the אַרבעטער שטימע (Voice of Labor).

He was the author of all the proclamations issued by the Central Committee of the Bund during the Revolution of 1905 and also prepared literary compositions for the illegal Jewish press. While editing newspapers and working with these underground organizations he also wrote books, short stories and literary essays.

Di Shvue, the anthem of the Bund: 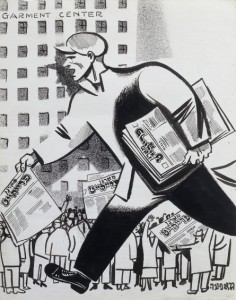 At the end of 1906, Olgin left Russia for Germany, where he studied at the University of Heidelberg. He returned to Russia in 1909 and became active as a teacher and lecturer.

In 1913 Olgin moved to Vienna and became the co-editor of the Bundist weekly די צייַט (The Time) which was published in St. Petersburg. In 1914 he emigrated to New York, and became a staff member of the Jewish Daily Forward and completed a Ph.D. at Columbia University.

One of the founders of the Communist Daily פרייַהייַט (Freedom), later the מאָרגן-פרייַהייַט (The Morning-Freedom), Olgin remained its editor until his death. He was also the editor of the monthly דער האַמער (The Hammer) and the New York correspondent of the Moscow Pravda. Olgin was the author of numerous books and pamphlets in seven languages: English, Russian, German, French, Polish, Hebrew and Yiddish. He also translated several works by Lenin, Friedrich Engels, Mendele Moykher-Sforim, and Jack London. Olgin died at his Bronx home of a heart attack on November 22, 1939.