The novelist, poet, playwright, and later cowboy Isaac Raboy was born November 1882 in the Podolian village of Zawale (today in Ukraine). His family moved to northern Bessarabia and settled in Riskhan (today Rîșcani, Moldova) then a thriving, multi-ethnic small town. 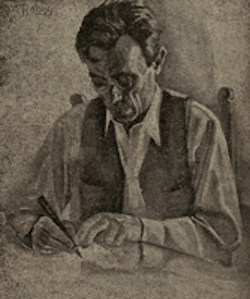 In Rishkan, Raboy developed a love of secular subjects and Russian, Yiddish, and Hebrew literature. Following the 1903 Kishinev pogrom and seeking to avoid conscription, Raboy immigrated to New York where he worked in a hat factory.

His fellow hat maker Dovid Ignatoff and friend Mani Leyb brought him into their circle of young writers, “די יונגע (the Young Ones),” and Raboy began publishing in their journal. Seeking open spaces, Raboy moved to North Dakota where he worked on a horse ranch. 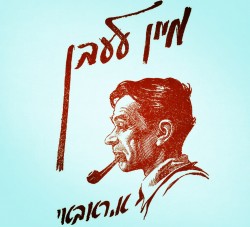 He returned to the East Coast in 1913 to try his hand at farming in Connecticut and New York, but continued working in the city’s factories after his attempts failed.

His love of the plains and the freedom of the open frontier, which resonated with his Bessarabian youth, featured prominently in his short stories and his two popular novels, הער גאָלדענבאַרג (Mr. Goldenberg) and דער ייִדישער קאַובוי (The Jewish Cowboy). reflect his farming experiences.

In the 1930s Raboy moved to Southern California, hoping that more temperate climate would help his tuberculosis. He died on January 8, 1944 at the Los Angeles sanatorium of the Jewish Consumptive Relief Association in Duarte, California (which became the City of Hope National Medical Center in 1949).

In honor of Isaac Raboy and all yidishe cowboys, here’s SoCalled’s “You Are Never Alone,” the anthem of Jewish cowboys everywhere: