Henri Barbusse was born 17 May 1873, in the town of Asnières-sur-Seine, northwest of Paris. A staunch pacifist and humanist, his work was exceptionally popular in Yiddish translation in the years between the two world wars.

Barbusse began publishing with a collection of poetry in 1895. As a young man he published poetry in the press, before shifting to prose with his 1908 novel, L’enfer (Hell). In 1914, at age 41, despite his increasingly more pacifist worldview, he volunteered for the French infantry.

The great shift in Barbusse’s worldview came with his time serving in the First World War. Enlisting in 1914, he served in the infantry and was cited for his bravery. After his discharge 17 months later, Barbusse’s staunch pacifism and humanism would become the dominant themes of his work.

Following his time in the army and the release of what would become his most acclaimed novelistic account of the war, Barbusse passionately spoke out against militarism and decrying the colonialist use and manipulation of war.

Enlisted in the French army in 1914, Barbusse fought on the front lines for 17 months.

Under Fire was a global bestseller. The title page of its 1927 Yiddish edition, with its most famous excerpt.

After Barbusse died, Monde dedicated its 5 September 1935 issue to its founder. The review stopped publishing the following month. 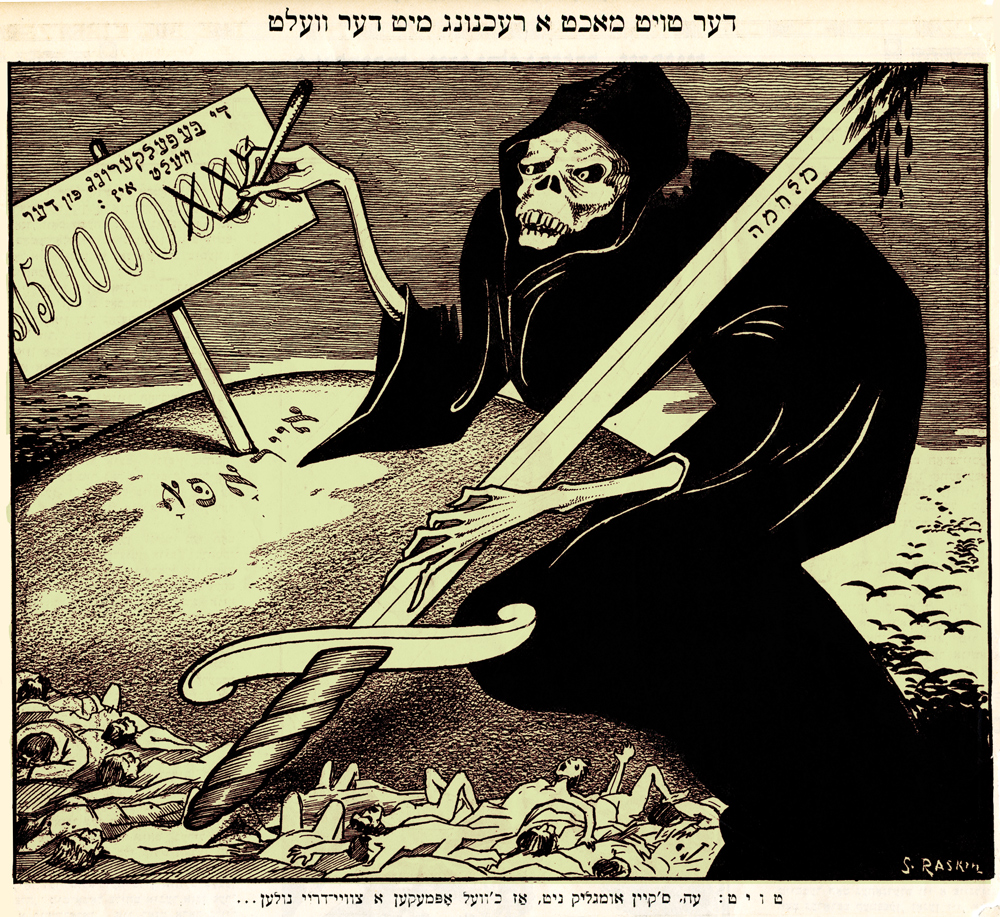 Barbusse produced his best-remembered work, Le Feu: Journal d’une escouade (Under Fire: The Story of a Squad) while writing on the front. The novel, a brutal, autobiographical novel about the experience of a volunteer squad on the Western Front, was published in December 1916.

Le Feu would win the Prix Goncourt later that year. The book was a huge international success; its Yiddish translation was a bestseller. Its first chapter contains one of Barbusse’s most memorable quotes:

“…Two armies at battle with each other, is actually one great army committing suicide.”

In addition to working with other great progressive writers such as Romain Rolland in a variety of journals, including the review Clarté, Barbusse launched an international/internationalist newspaper Monde to galvanize leftist writers under one masthead and away from what he understood as a bourgeois-oriented publishing business.

In 1917, Martin Buber’s monthly journal Der Jude published an article by Anselm Kleinmann on a popular song sung by Jewish soldiers “literally in the trenches,” inspired by a Ukrainian soldiers’ song — both Jewish and Ukrainian soldiers from Galicia served side by side in the Austrian army. The Yiddish lyrics there begin: “Over the green fields and woods, lies a soldier riddled with bullets. His body is ripped open and from his wounds blood comes pouring…” The song was sung by Jewish soldiers across the front and many versions were transcribed and recorded.

Here’s a haunting recording of this Yiddish lament of the Great War performed by the great Leibu Levin (born in Bukovina, Austria-Hungary in the fateful year 1914), courtesy of his daughter, the singer and actor Ruth Levin. Levin’s recording sticks close to the originally published lyrics, which Ruth notes, Leibu learned from his mother.

And here’s Sidor Belarsky with a slightly less graphic version, found in the Soviet anthology of Yiddish songs by Itzik Feffer and Moisei Beregovsky.

This version begins: “1914 came and I was taken into the ranks, oy vey! Over the green fields and woods, lies a killed soldier, oy vey! A bird flies down and rests on his grave, oy vey!

Finally, a mashup of this Yiddish World War One lament with the classic anti-war song “Johnny I Hardly Knew Ye,” and “Deus meus adiuva me,” an Irish/Latin macaronic hymn from the eleventh century, performed by Lorin Sklamberg and Susan McKeown from their 2009 record Saints & Tzadiks. (We apologize if this video is not available in your country!)