The Mother of Yididsh Theater

Esther Rachel Kaminska was born Ester-Rokhl Halpern on March 10, 1870 in the village of Porozovo (today Поразава, Belarus). The daughter of a poor cantor, she was entirely self-educated and worked as a modiste, selling fashionable ladies’ hats.

In 1893, she married actor, director, and theater organizer Avrom-Yitskhok Kaminski. She made her debut in his troupe in 1888. Together, the Kaminskis organized a series of companies with which, for more than a decade, they staged the plays of Avrom Goldfadn, touring the cities and small towns of the Russian Empire’s Pale of Settlement. 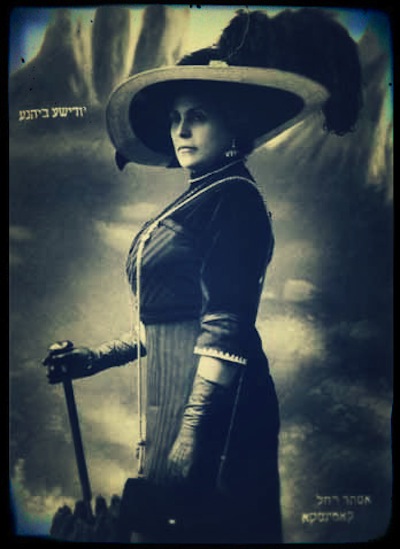 In 1905, when official restrictions on public Yiddish presentations waned, the Kaminskis headed to Warsaw. Together they established the Kaminski Theater and began to present a new kind “literary” or “artistic” repertoire championed by Y. L. Peretz and his disciples. Kaminska began her ascent to fame when she acted in the world premiere of Peretz’s די גאָלדענע קייט (The Golden Chain).

In 1907, the Kaminskis founded the ליטעראַרישע טרופּע (Literary Troupe), the first company to dedicate itself to this type of new repertoire. Esther Rachel Kaminska and the company toured the Russian Empire from 1908 to 1909 and its two engagements in Saint Petersburg were acclaimed in the Russian liberal press.

Kaminska was most renowned for her roles in plays by Jacob Gordin, the “Jewish Ibsen” of the New York Yiddish stage, whose melodramas were filled with powerful women’s roles. In Warsaw in 1905, Kaminska played the title role in Gordin’s כאסיע די יתומה (Khasye the Orphan Girl) about a great-hearted Jewish country girl brought to work in a modern middle-class family and finally destroyed by its hypocrisy. Several years later she played the title role in Gordin’s מירעלע אפרת (Mirele Efros), the “Jewish Queen Lear,” arguably the most popular play in the history of Yiddish theater. Kaminska also played the lead roles in A Doll’s House by H. Ibsen and The Lady of the Camellias (La dame aux camélias) by Alexandre Dumas, fils.

Such stellar performances led her colleagues and audiences to refer to her as “Di Mame” Ester-Rokhl—the mother of the Yiddish theater. During a period when Yiddish theater was dominated by cheap melodramatic performances derided as “shund,” or trashy theater, Kaminska stood out for her measured and thoughtful performances that championed Yiddish acting as art.

As a pillar of the Vilna Troupe and, later, of the VYKT Warsaw Yiddish Art Theater, she was attributed with having successfully promoted European classics in Jewish theater, including works by Shakespeare, Chekhov, and Shaw.

Kaminska also appeared in Yiddish-language silent films, including Mirele Efros, דער אונבאַקאַנטער (The Stranger), די שטיפֿמוטער (The Stepmother), and Peretz Hirshbein’s תּקיעת-כּף (The Vow). The Kaminskis had three children: Regina (who died quite young), the composer and violinist Josef, and the Yiddish actress Ida Kaminska.

When Ida Kaminska returned to Poland after the Second World War, she established a State-funded Yiddish theater in Wrocław in November 1949 and named it for her mother. In 1955 the theater moved to Warsaw and, in 1970, into its own building on Plac Grzybowski, where it took on the name Teatr Żydowski im. E. R. Kamińskiej, the Esther Rachel Kamińska Yiddish Theater. After the death of Ida Kaminska, her name was added to the theater’s official name.

Here’s the last third of the 1924 film תּקיעת-כּף (The Vow, or A Vilna Legend), in which Kaminska appears alongside her daughter Ida, directed by her son-in-law, Zygmunt Turkow, with narration added in the 1930s by the famed Yiddish actor, Joseph Buloff. The film was shot on location in Wilno (today, Vilnius) and includes spectacular images of the now ruined historical Jewish sites in the city.