Reyzen became a private tutor in his hometown and in surrounding communities, where he grew acquainted with the ideas of the Russian workers’ movement. His collection of poetry, טרויעריקע מאָטיוון געווידמעט אָרעמע לייַט (Sad Motifs Dedicated to the Poor), dealt with social themes and was published, at the recommendation of Sholem Aleichem, in Philadelphia’s שטאָט-צייַטונג (City Paper). Reyzen’s first short story was printed as a booklet in Vilna in 1892. He published frequently and became known for his mastery in producing concise plots and in focusing on a central theme.

In 1895, Reyzen enlisted in the Russian army and served in a musicians’ unit until 1899. For a brief period he lived in Minsk and then settled in Warsaw. In 1900, he created the literary anthology דאָס 20סטע יאָרהונדערט (The Twentieth Century), to which Y. L. Peretz, Hersh Dovid Nomberg, Dovid Pinski, and others contributed.

As a writer identifying with socialist ideology, Reyzen contributed to the Bund’s legal and illegal publications, often using the pseudonym M. Vilner, during the late nineteenth and early twentieth centuries. Many of his poems were set to music. 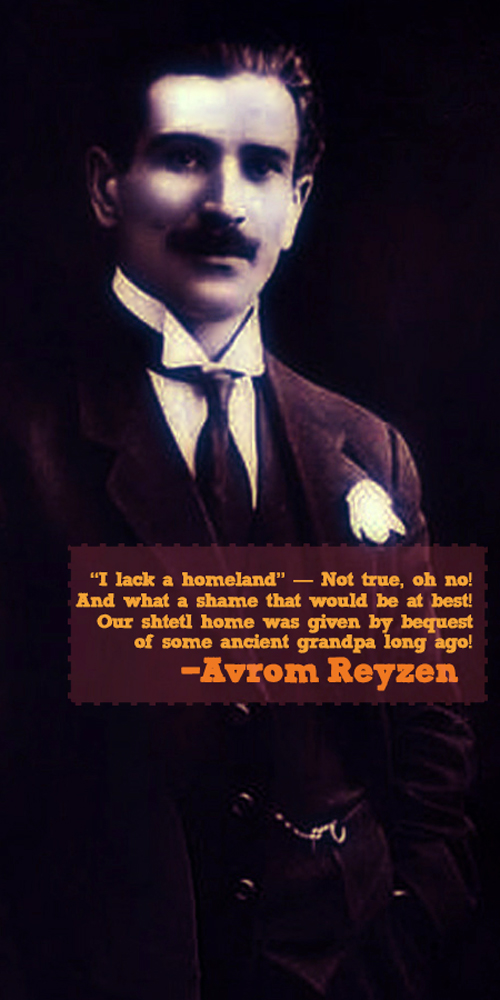 In 1902, Reyzen was a founder of the Central Publishing House in Warsaw, which published his collection of poetry, צייַט לידער (Period Poems), and his first collection of stories, ערציילונגען און בילדער (Stories and Scenes). He also regularly contributed to popular newspapers such as דער פרייַנד and דער טאָג in Saint Petersburg. In 1908, he published two textbooks in Yiddish, as well as the first collection of קונסט און לעבן (Art and Life).

In the same year, Reyzen took a forceful stand in support of Yiddish at the Czernowitz Conference (that’s Reyzen on the far left in the picture above, with — from left to right — Peretz, Asch, Zhitlovsky, and H.D. Nomberg). In 1910, Reyzen initiated and edited the new Warsaw literary weekly אַייראָפּעיִשע ליטעראַטורע (European Literature), which published translations of world literature as well as original works of Yiddish writers. In 1911, Reyzen edited a similar collection of translations titled פֿרייַע ערד (Free Land).

In early 1911, Reyzen moved to New York, where he contributed regularly to the Forverts and Tsukunft. Most editions of his collected works first appeared in New York. Especially noteworthy are Reyzen’s three volumes of memoirs, titled עפּיזאָדן פֿון מייַן לעבן (Episodes of my Life). Reyzen was also known for his flowing language and as the creator of a wide range of characters from all layers of Jewish society, both traditional and rebellious. He also wrote about immigrants and their difficulties adapting to their new homes. In his writing, he focused on the details of daily life and on characters living at the margins of society. The seeming instant adaptability of his poetry to music gained his writing a popular following.