Ferdinand August Bebel, known by his middle name, was born on February 22, 1840, in Deutz, Germany. As a young man, Bebel apprenticed as a carpenter and joiner and spent several years traveling around Europe looking for work.

In 1860, he settled in Leipzig where he made horn buttons and participated in various labor organizations. Bebel began reading the pamphlets of Ferdinand Lassalle, through which he initially became immersed in the ideas of Karl Marx. In 1865, under the mentorship of Wilhelm Liebknecht, Bebel decided to commit himself completely to the socialist cause.

Together with Liebknecht, he founded the Sächsische Volkspartei (Saxon People’s Party) and in 1867 Bebel entered the Reichstag of the North German Confederation representing his party.

In 1869 he helped found the party that would become the Social Democratic Party of Germany (SPD). In 1870 Bebel and Liebknecht were the only members of the North German parliament to vote against the continuance of the war with France.

Bebel's views on socialism and social justice continued to be a foundation of German leftism.

Bebel's strong advocacy of women, sexual minorities, and Jews made him much loved by a Yiddish-reading public 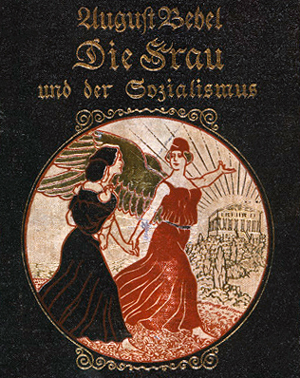 In 1871, Bebel was the only socialist who was elected to the Reichstag, and used this position to defend the Paris Commune in the parliament. He was jailed for “high treason” and “insulting the Emperor.”

Bebel was a particularly strong proponent of women’s rights, even for a socialist of his era, and he attacked the institution of marriage. The goal of this activism, he wrote, was:

…not only to achieve equality of men and women under the present social order… but to go far beyond this and to remove all barriers that make one human being dependent upon another, which includes the dependence of one sex upon another.

In addition to his advocacy of gender-based equality, Bebel was the first person to speak in parliament against Germany’s anti-gay “Paragraph 175,”  legislation which was not repealed until 1969.

He argued in favor of a petition that was being circulated by the Scientific Humanitarian Committee, the world’s first activist gay rights organization, founded in 1897 by the prominent Jewish physician Magnus Hirschfeld.

Bebel was also the first person to publicly reveal the existence of “pink lists” on which the police recorded the names of homosexuals regardless of whether they had been convicted of sexual crimes or not.

He is also famous for his outrage at the news of the German policy of extermination towards the Herero people in German South-West Africa, considered the first genocide of the 20th century, in which up to 100,000 indigenous opponents to German rule were driven into the desert and starved to death.

He later followed this up with strongly worded warnings against the rising tide of theories of racial hierarchy and racial purity. In the most explicit terms, Bebel condemned anti-Semitism with his well-known saying “anti-Semitism is the socialism of fools.” Bebel’s writing was widely translated, including into Yiddish, and esteemed by Jewish readers around the world.

August Bebel died August 13, 1913 during a visit to a Swiss sanatorium.

A clip from the 1919 German silent movie Different From the Others. It was made as a form of protest against Paragraph 175 of the German Penal Code which made homosexuality between men against the law.

Bebel was among the socialist icons immortalized in bas relief portraits on the facade of The Forward building, erected in 1912 as the headquarters of the New York Yiddish-language socialist newspaper, which published and promoted his ideas among Yiddish speakers and readers in the U.S. The building was sold and developed into luxury condominiums in 2006.