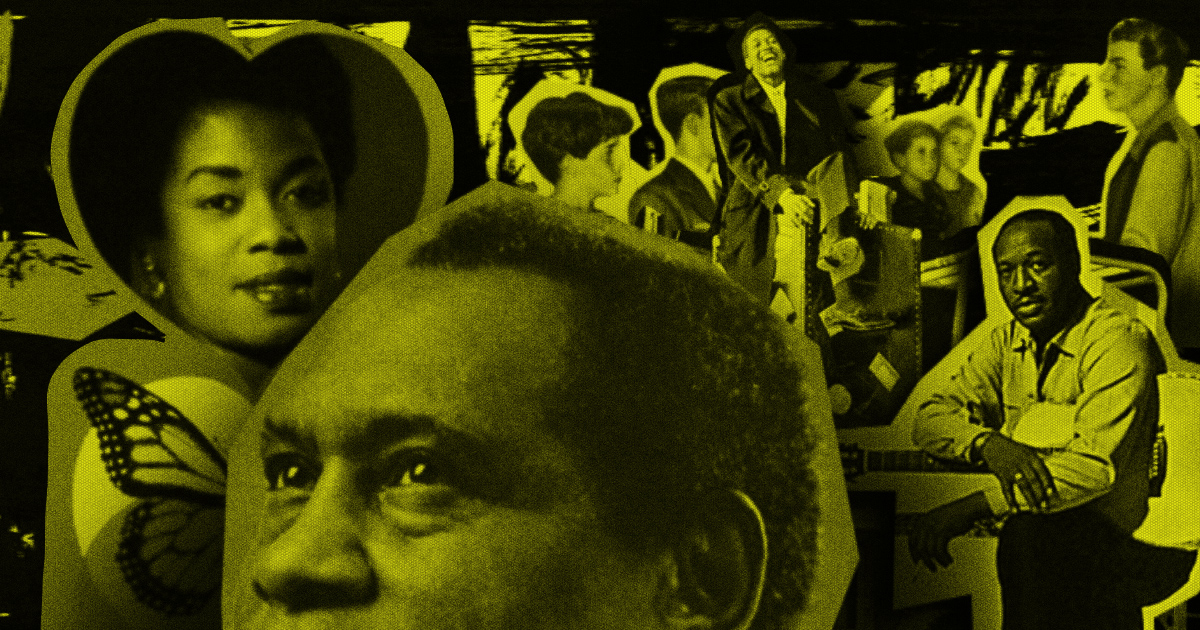 In the years that followed the entry of the United States into the Second World War, a surge in American patriotism swept the country. The songwriters Abel Meeropol (under his pen name Lewis Allan), most famous for “Strange Fruit,” and Earl Robinson, perhaps best known for “Joe Hill,” composed a song to remind Americans about what was at stake in the fight against fascism.

For your listening pleasure, we include here (following the complete lyrics below), a chronology of important recordings of this song.

The house I live in,
A plot of earth, a street,
The grocer and the butcher,
And the people that I meet,
The children in the playground,
The faces that I see:
All races, all religions—
That’s America to me.

The place I work in,
The worker at my side,
The little town or city,
Where my people lived and died,
The “howdy” and the handshake,
The air of feeling free,
The right to speak my mind out—
That’s America to me.

The things I see about me,
The big things and the small,
The little corner newsstand,
And the house a mile tall,
The wedding in the churchyard,
The laughter and the tears,
The dream that’s been a-growing for 150 years.

The town I live in,
The street, the house, the room,
The pavement of the city,
Or a garden all in bloom,
The church, the school, the clubhouse,
The million lights I see,
But especially the people—
That’s America to me.

The house I live in,
The friends that I have found,
The folks beyond the railroad,
And the people all around,
The worker and the farmer,
The sailor on the sea,
The men who built this country—
That’s America to me.

The house I live in,
My neighbors White and Black,
The people who just came here
Or from generations back,
The town hall and the soapbox,
The torch of Liberty,
A home for all God’s children—
That’s America to me.

The words of old Abe Lincoln,
Of Jefferson and Paine,
Of Washington and Jackson
And the tasks that still remain.
The little bridge at Concord,
Where freedom’s fight began,
Or Gettysburg and Midway
And the story of Bataan.

The house I live in,
The goodness everywhere,
A land of wealth and beauty
With enough for all to share.
A house that we call “Freedom,”
The home of Liberty,
but especially the people—
that’s America to me.

The great folk songwriter Earl Robinson introduced his song on a “V” disc (a record label that in 1943 provided records for U.S. military personnel) by reminding listeners:

“I guess I’ve heard it said a thousand times and a thousand different ways just why we’re fighting this war. Well, I’d like to say it this time maybe just a little differently…”

In the journal Opportunity, which was associated with figures from the Harlem Renaissance, we find one of the earliest references to the song in a profile of its first noted performer, Josh White. White makes the song his own, by singing the often skipped verse about racial unity and ends by singing: “With its promise for tomorrow— that’s America to me.”

“One song which he invariably sings—at benefits, before his show at the Café Society is over, on his radio programs, and by popular request—is “What Is America to Me?” He sings it for the people who are listening, but he sings it for himself, too . . . He believes in the country he lives in, in its fundamental idea and concept of the democracy he’s trying to help perfect. For Lewis Allan, who wrote the words of that song, it probably reaches its fulfillment when Josh White sings it. There is no doubt in the minds of the people who listen to him that he believes in his country—despite the fact that he never forgets there is room for the fight he is making.” (Opportunity, Summer 1944).

1945 • The House I Live In… Starring Frank Sinatra

The House I Live In was transformed into a ten-minute short film in 1945. Written by Albert Maltz, produced by Frank Ross and Mervyn LeRoy, and starring Frank Sinatra, the film now addressed a spike in post-War xenophobia, racism, and anti-Semitism. It received a special Academy Award in 1946 for “Tolerance Short Subject.” The song became a standard part of Sinatra’s concerts for decades.

The song became a part of the repertoire of Paul Robeson as early as 1945 and became a central part of his landmark anti-fascist 1947 album, Songs of Free Men. When he sang it at his 1958 concert at Carnegie Hall, reviewers noted that “the audience hung breathlessly at the emotion in the words.”

The a cappella group, The Ravens, were one of the most popular bands with hits on the “race records” charts, as the R & B Charts were called in the late 1940s. This Harlem-based group recorded the song in 1949 as the B-side of their popular hit, “Ricky’s Blues.”

In 1947, Roy Hamilton, then 17 years old, won the singing competition held by New York’s Apollo Theater. While he still struggled to get his unique blend of gospel and classical technique, he finally topped the Billboard charts in 1954 and 1955 with his recordings of “You’ll Never Walk Alone” and “Unchained Melody.” “The House I Live In” appeared on his 1955 hit album that included his two chart-topping hits.

Dubbed the “King of Soul,” Sam Cooke sang the song on his album “Cooke’s Tour,” which the liner notes is “an adventurous travelogue” exploring the world. “The House I Live In” was the final track on the album and apparently closest to Cooke’s heart, as he recorded the song just after moving into his ideal home in L.A.’s  Leimert Park neighborhood.

“The Divine One” recorded this in 1961 for her album My Heart Sings, a uniquely somber and quiet record for the Jazz legend.

Before she made a career of peddling orange juice and homophobic hate, the later icon of the Christian Right seemed not to mind the leftist songwriters of “The House I Live In,” which she included on her collection of patriotic songs in 1966.

Despite all of the classic recordings by a wide variety of great artists (and Anita Bryant), for many this song is inextricably linked to Sinatra. At Old Blue Eyes’ 80th birthday celebration, Patti LaBelle brought down the house with her version of “Frank’s song.”

After the devastation of Hurricane Katrina, the jazz world responded with a benefit concert a month later. Here, when Dianne Reeves sings the refrain of “the house I live in” it takes on a new, powerful significance.