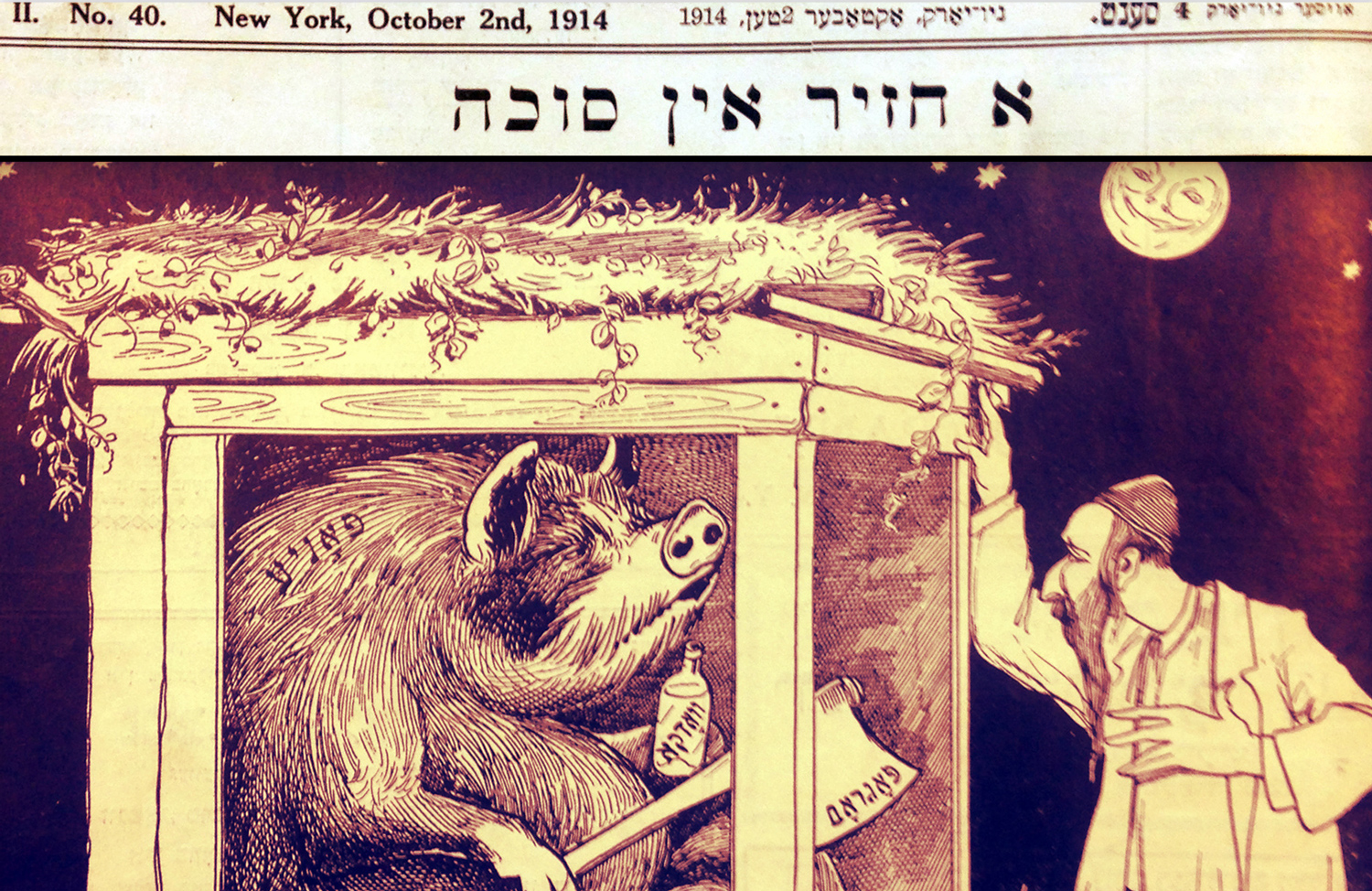 Those who follow Yiddishkayt’s facebook page will recall how this October we posted a series of Sukes-themed cartoons from Yiddish newspapers, culled from the archives, colorized, and brought back into the public eye for the first time in decades. In addition to being pieces of aesthetic art, these cartoons actually tell us a lot about the culture and politics of Yiddish-speaking Jews in the places and times in which they were published.

Our first cartoon was printed in the New York Yiddish weekly Der Groyser Kibitser (דער גרויסער קיביצער) on 2 October, 1914, just a few months into World War I. Jewish immigrants in the United States were nervously thinking of the families and communities they had left behind in Eastern Europe and the violence that the war’s eastern front threatened to bring. This particular cartoon refers to the Russian occupation of the Austro-Hungarian province of Galicia, a region heavily populated with Jews whom the Russians feared would remain loyal to Austria-Hungary. The title – “A khazer in suke” – translates as “A Pig in the Suke” and the Jew in the cartoon is observing just that: a hog labeled “fonye” (a derogatory Yiddish personification of Russia) sits in the suke labeled “Galitsien,” holding an axe marked “pogrom” and a bottle of vodka. The Russian occupation did indeed take a horrible toll on the Jews of Western Galicia, both in terms of physical violence – the worst in the region since the 17th-century Chmelnicki Uprising – and the censorship of the Yiddish press. 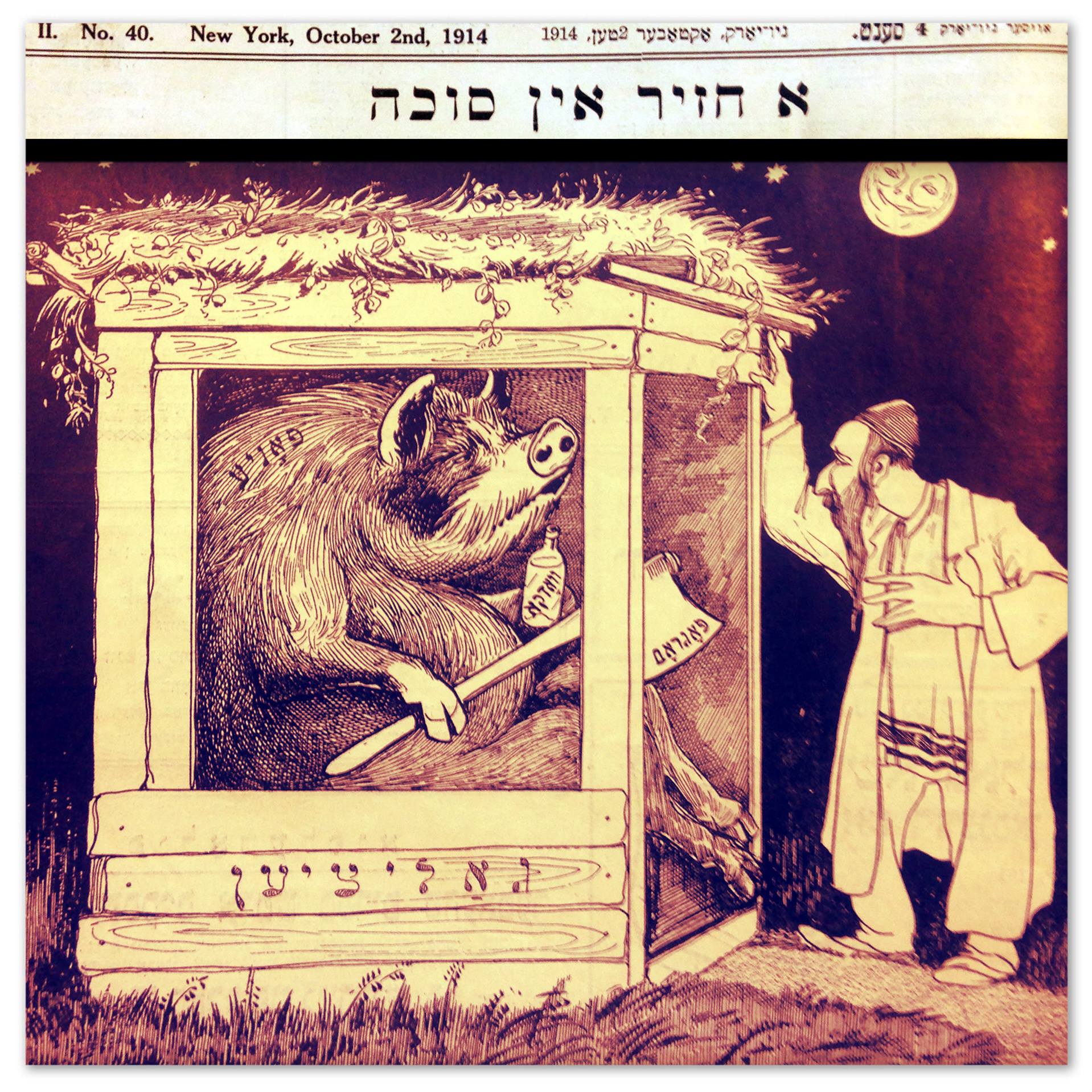 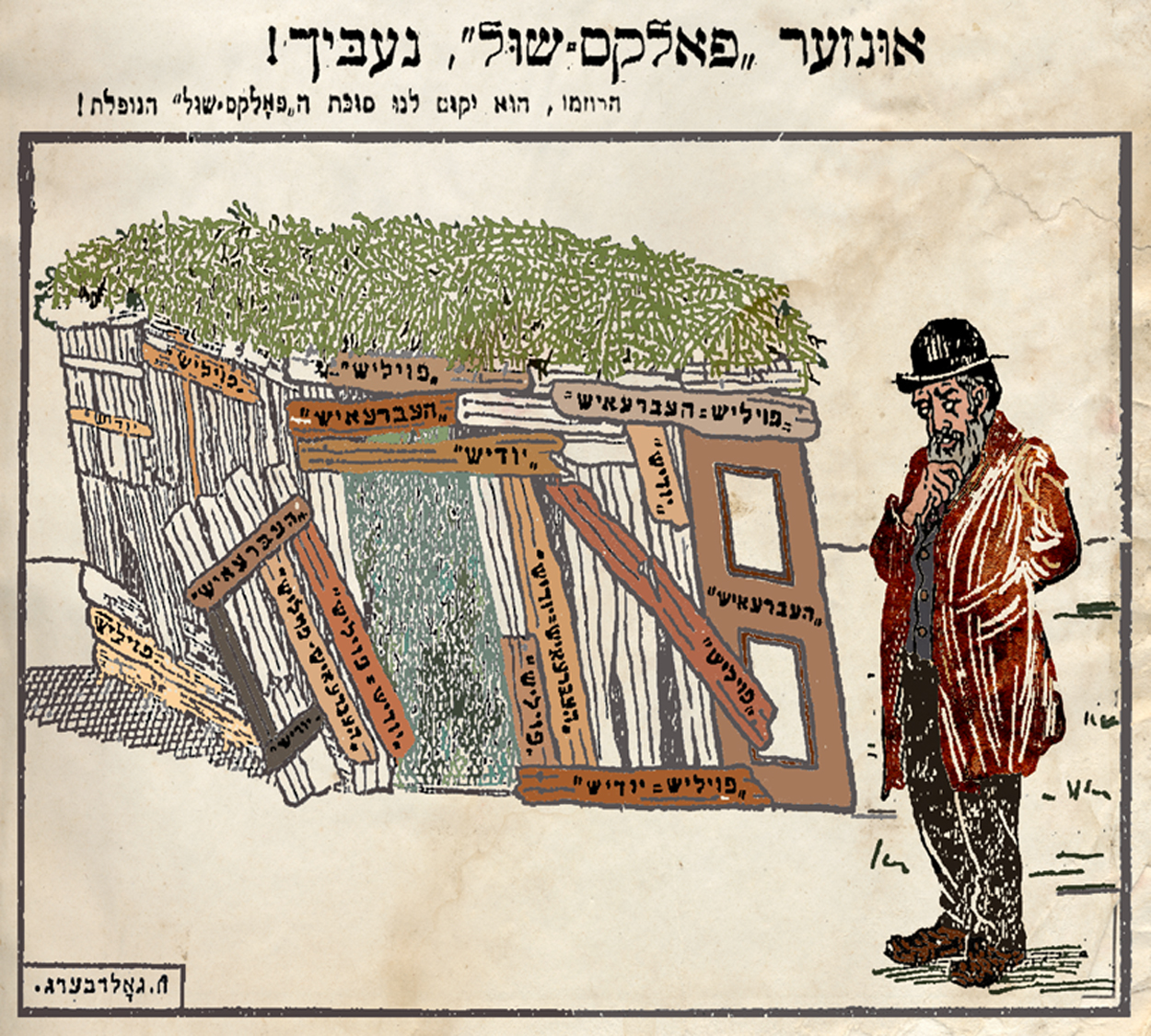 Our next cartoon, by one H. Goldberg, comes from Warsaw, where it ran in the daily Der Moment on 16 October 1916. A Jew stands contemplating a suke made out of heterogenous materials: different boards are labeled “Yiddish,” “Hebrew,” “Polish,” or combinations of these languages. The larger caption, in Yiddish, reads “Our poor folk-school!” while below, “come, he will build us a marvelous ‘folks-shul’ suke!” is written in Hebrew. Goldberg’s cartoon reflects the difficult language question that Jews in Poland, including those in the folkshul movement, faced. As we see, the communal Jewish “suke” was made up of numerous, at times conflicting opinions on the matter.

Der Moment evidently prided itself on its caricatures and this next cartoon comes from the 28 September 1928 issue. It uses the esrog, or citron associated with traditional Sukes rituals, to comment on nationalist politics in that corner of Northeastern Europe. One of the conditions necessary for an esrog to be kosher is for its “pitem,” (פּיטום) or tip to remain intact. In this case, Vilne (modern-day Vilnius, then called Wilno in Polish) is the “pitem” of Poland. The figure to the left threatening the physical and spiritual (?) integrity of the Second Polish Republic is the Lithuanian Prime Minister and nationalist Augustinas Voldemaras, easily identifiable by his characteristic flattop hairstyle. The caption reads “He’s got its scent! The wretch wants to bite off the pitem, oh how he wants to!” 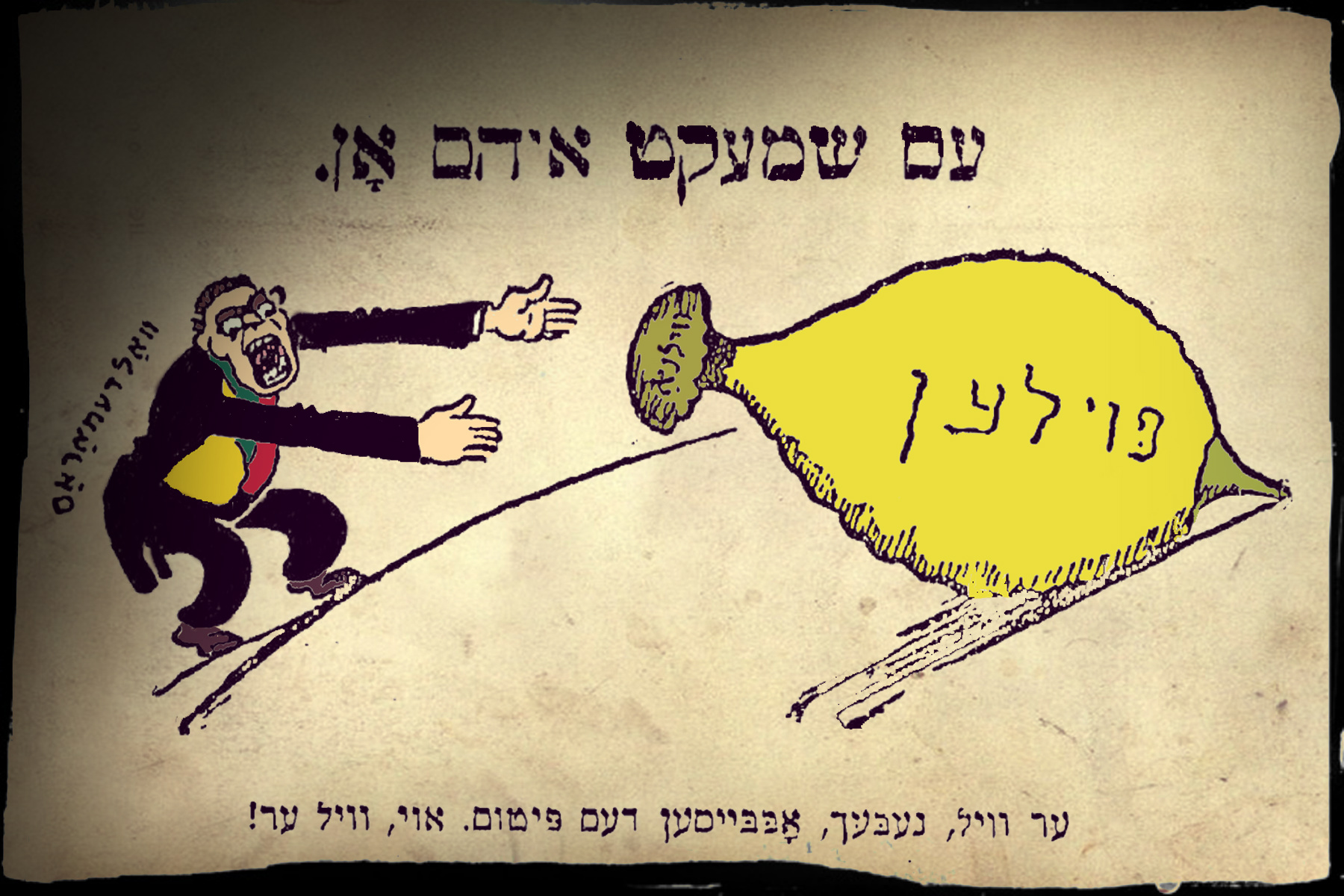 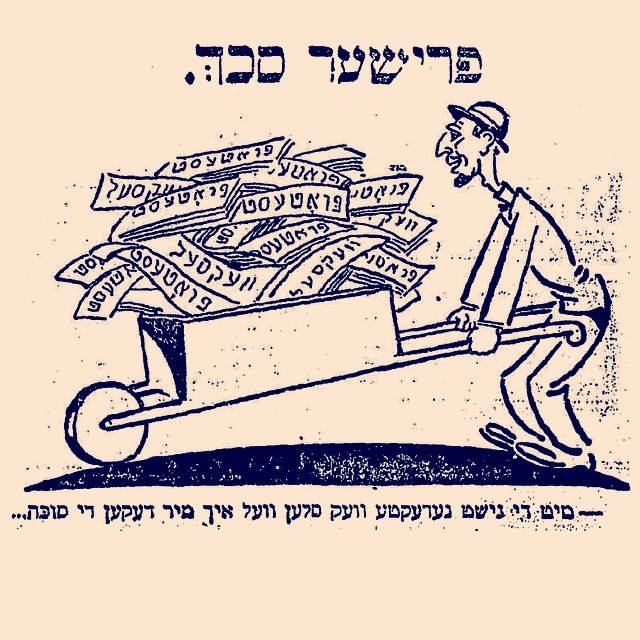 In the same issue that the above cartoon appeared in Der Moment, this one did as well. Rather than using the esrog as a metaphor, this cartoon focuses on “skhakh” (סכך), the vegetal covering for a suke. A man is pushing a wheelbarrow stacked high with protest placards and government I.O.U. notes. Commenting on the contemporary Polish political-economic situation, the caption translates “I’ll cover my suke with unpaid [literally “uncovered”] I.O.U.s…”

This last cartoon was printed in another Warsaw newspaper, Unzer Expres in 1937, and it depicts a rather unsettling yet little known folk custom. “In a suke on Świętokrzyska Street,” a wife brings her startled husband a steaming bowl of kreplakh, or dumplings. “Why are [you bringing] kreplakh into the suke?” he asks. “You know,” answers the wife, “that usually when I beat [“shlog”], I make kreplakh.” Several yizkor bikher and other sources confirm that kreplakh were associated with “shlogn,” and were eaten on Purim [beating effigies of Haman], Yom Kiper [“shlogn kapores” – the custom ceremonially placing one’s sins onto a sacrificial chicken – and/or beating one’s chest during the confessional prayer], and Hashone Rabo [the last day of Sukes, when willow branches are beaten against the ground during prayers of supplication]. This cartoon, however, references the popular belief that when kreplakh were eaten any other time of year, it meant that husband and wife had beaten each other. Unfortunately, domestic violence affected Yiddish-speaking Jews — just as it did all other groups and communities in Eastern Europe — and evidently made its way into folkways and even culinary customs. 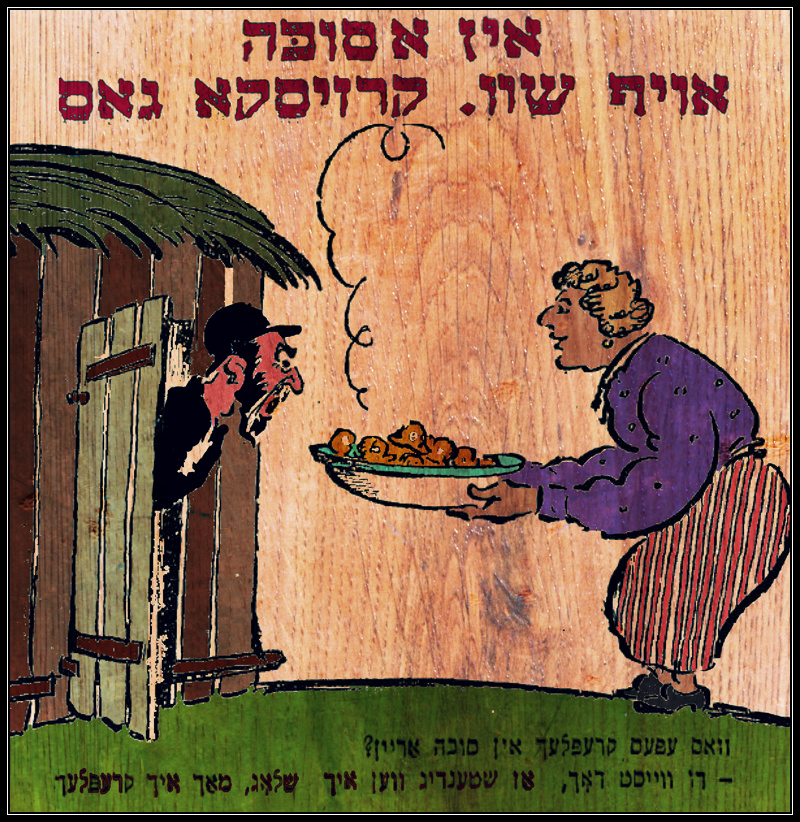