The band comes to West Hollywood for this one-night event with their new album Bad Old Songs with special guest Psoy Korolenko. 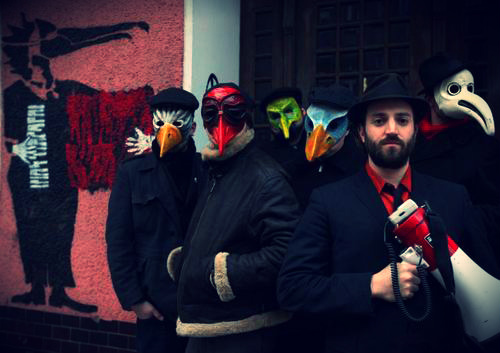 Formed in Berlin in 2005, the Painted Bird has built an international cult following, touring from Moscow to Marseille, Istanbul to Indiana. Playing everywhere from underground punk clubs to Central Park Summer Stage, Turkish cabarets to abandoned Polish synagogues, Daniel Kahn and the band challenge the borders between radical and traditional, lyrical and political, east and west, folk and punk, mama loshn and loshn hora.

Bad Old Songs, the fourth album from Daniel Kahn & the Painted Bird is a dark and intimate follow-up to their award-winning Lost Causes, featuring polyglot reinventions of Yiddish folk songs and classics from Leonard Cohen and Franz Josef Degenhardt. In the desolate borderlands between Berlin, Detroit, New York, and Yiddishland, these Bad Old Songs are the midnight reveries of a lost time that is yet to come.

Co-sponsored by the City of West Hollywood Arts & Cultural Affairs
(Reserving online ensures you a ticket — and preferential seating at this venue. You can reserve a seat up to 8 hours before the show.)

Check out Daniel Kahn and the Painted Bird with their take on Mordechai Gebirtig!

“Kahn’s music transcends any label, Jewish or otherwise: it is cosmopolitan in every sense of the word.”