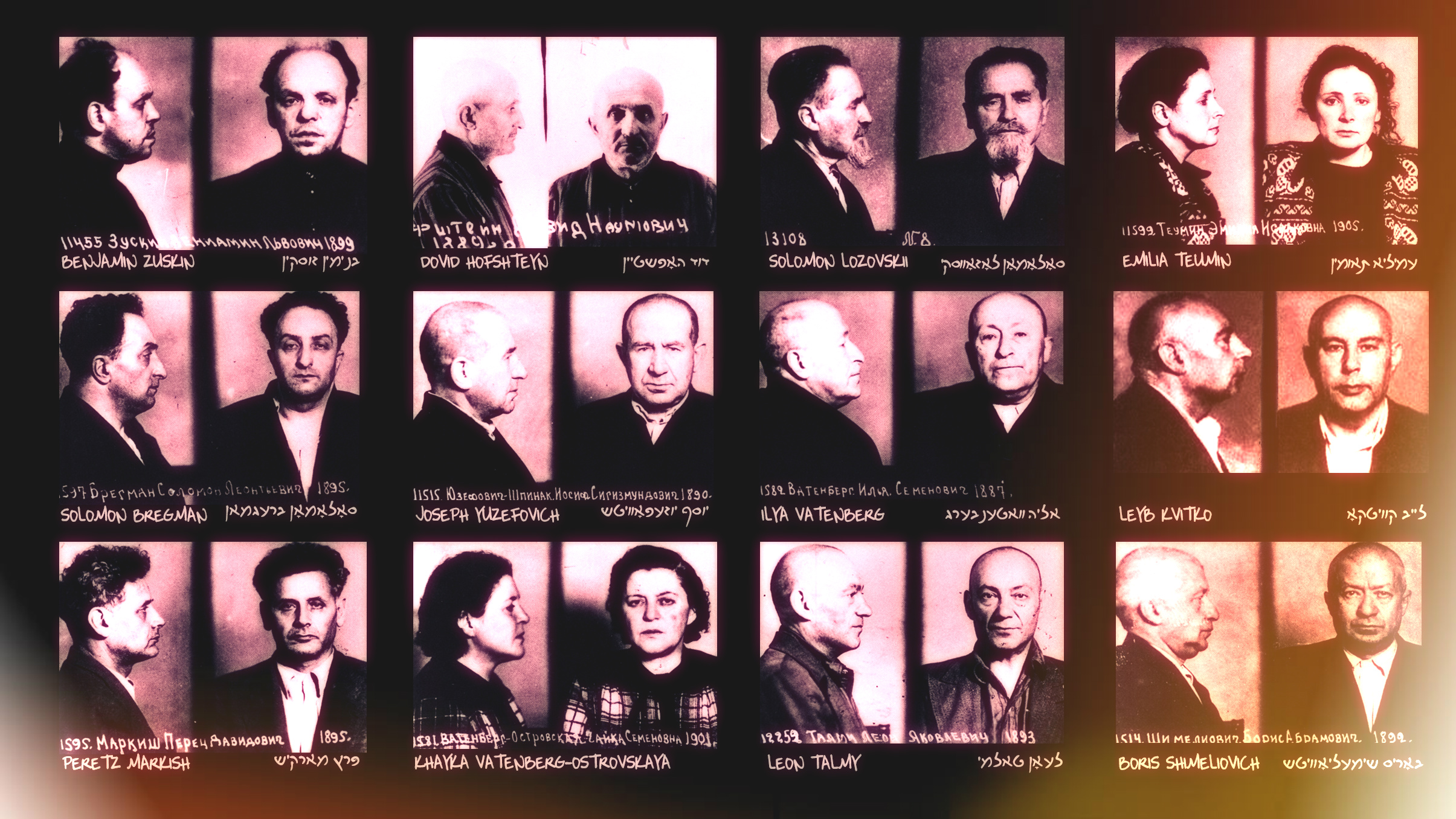 August and After:
Remembering Soviet Yiddish

How We Remember Soviet Yiddish Culture

In August 1941, just months after the start of Operation Barbarossa, the German invasion of the Soviet Union, leaders of the Soviet intelligentsia gathered in Moscow to form the Jewish Antifascist Committee. Among them were Yiddish writers such as Dovid Bergelson, Dovid Hofshteyn, Peretz Markish, and luminaries such as Sergei Eisenstein and Yiddish actor Shloyme Mikhoels. Their mission was to appeal to the world to support the war effort in light of the forced evacuations and the mass slaughter that the Germans and their fascist collaborators were already carrying out.

After the war’s end, in late 1948 and into 1949, the members of this Committee were arrested. The women and men — writers, scientists, journalists, academics, poets, filmmakers — who tirelessly worked throughout the war years to mobilize Jews of the world in the struggle against fascism, disappeared into Soviet prisons and dismal interrogation rooms over the course of the next three years. This moment marked the terrible beginning of the tragic end of Joesph Stalin’s assault on Jewish life and culture in the USSR. After a grossly unfair two-month long trial, excruciatingly detailed in Stalin’s Secret Pogrom, 13 of the 15 arrested were found guilty of treason, anti-Soviet activity, and espionage (one of the accused died after being tortured, another sentenced to prison). The 13 were sentenced to execution by firing squad. They were shot to death in Moscow on August 12, 1952.

Because the verdicts and executions were kept secret, only scant information trickled out of the Soviet Union, mostly regarding the fates of the most famous (male) writers. Later that year, still unsure of the fate of those arrested, New York–based Yiddish writers Joseph Opatoshu and H. Leivick, the editors of the American literary journal Zamlbikher, wrote in despair:

“One thing we know for certain… There, Yiddish literature is no more; Yiddish theater is no more; no Yiddish newspapers, not even the most meager Yiddish school. Annihilation has been decreed for the entirety of Yiddish culture and literature in Soviet Russia.”

Just over three years after the executions, on November 22, 1955, the same Soviet court that had condemned them declared that the materials used in the original case had been falsified and that no crime had been committed. The court posthumously repealed the sentences of all the defendants as there “was no substance to the charges against them.”

Despite the actual tragedy of the event itself, by the 1960s, in Cold War America the black-letter day August 12, 1952 became an annual commemorative date on the calendar in some Jewish communities, notably the Workmen’s Circle and American Jewish Committee, known as the “Night of the Murdered Poets.” The commemoration’s new, yet factually-incorrect, title generally appeared in event programs along with statistics and details of unknown provenance describing the “execution of 24 Yiddish poets” or “24 writers and intellectuals.”

Framing a public commemoration in such a way helped underscore the anti-communist stance of these organizations in their attempts to differentiate themselves from other organizations who were historically sympathetic to the Soviet cause. The programs were less concerned with presenting the vibrant cultural history that had come to a violent end and pointed more at the tragic results of Soviet communism, lamenting the havoc it had wrought on Jewish life in particular and making clear that their engagement with Yiddish culture stood firmly against the dangers of communism. This attitude would grow more vocal throughout the 1960s, as the Workmen’s Circle shifted even further to the right, became more nationalist, and supported the war in Vietnam.

A trilingual film made in August 1941 from the Jewish Antifascist Committee, “To the Jews of the Entire World.” Featuring actor Shloyme Mikhoels (in Russian), poet Peretz Markish (in Yiddish), film director Sergei Eisenstein (in English), and writer Ilya Ehrenburg (in Russian).

Deputy Minister of the Russian SFSR

Director of the SovInformBuro (the central Soviet news agency)

Translator and Editor at the State Publishing House of Literature

Performer and Artistic Director of the State Jewish Theater

Arrest photographs of Jewish Antifascist Committee members. Not included here are the Yiddish novelist Dovid Bergelson and Yiddish Poet Itzik Feffer. All but two (Lina Stern, who was imprisoned and Solomon Bregman, who died after his interrogation) were executed 12 August 1952.

Now, after more than 65 years, we can correct the record to remember all of the victims of state terror conducted against these brave antifascist fighters. We remember them all: regardless of their former literary celebrity, personal politics, loyalty to now-disgraced regimes, or their responses to brutal interrogation. We remember them all for their tireless efforts to forge a united, global front in the struggle against fascism and Nazism in the face of the most bestial acts of barbarism in the twentieth century.

Much of Soviet Jewish culture, in what little has been written about it in English, has been viewed almost exclusively through the lens of the Purges and their miserable aftermath. Those who were killed emerge as pawns “used” by the Soviet state to betray their own people. Until recently, when people gathered to remember the Yiddish writers of the Soviet Union, most fell back on tragedy, perhaps because terror and murder make for more compelling and sympathetic stories.

Tragedy and defeat echo through most human history and the history of the Soviet Jewish experience is no different. It is an unquestionable tragedy that most members of the Soviet Yiddish intelligentsia died at the hands of the same state that had once given them unparalleled opportunities to carry out their cultural visions. And even though 1952 stands out as the key date in the demise of Soviet Yiddish culture, for those who wish only to wallow in Jewish tragedy or revel in the defeat of revolutionary politics, it is convenient to fixate on this date and ignore the many other dates in the tragic narrative of Soviet history: Yiddish writers were killed in the Red Army in the Russian Civil War, executed in Stalin’s Great Purges in 1936–1938, died in battle on the front in the Great Patriotic War (as the Soviet Union called World War II), and murdered in the genocidal horror of the Holocaust, and then, the final remnants of the Soviet Yiddish intelligentsia were wiped out in the antisemitic purges of 1948–1952.

Traditionally, we focus on 1952 and on the execution of these writers in the final paranoid purges because it is easier than accepting that the creators of Soviet Yiddish culture were human; they were complex, political souls with their intense enthusiasm for the birth of the Soviet Union and in its revolutionary potential. It is almost easier to talk about these writers with their demise, who by the 1950s were already seeing the end of the creative explosion of Soviet Yiddish. When we focus only on 1952, we can also more or less avoid the Yiddish writers most passionate about the Soviet cause who were murdered in the Great Terror of 1936 and 1937, like Meyshe Kulbak, Max Erik, or Izi Kharik or simply dismiss their ideological commitments as youthful indiscretions.

But such a focus prevents us from talking about the excitement and energy the Soviet Yiddish intelligentsia invested in this unique cultural, political, and aesthetic project — the passionate creation of a new Jewish Soviet culture and Soviet Jewish culture. By exclusively lamenting the murder of these great writers, we miss the opportunity to celebrate their work and their commitment to a vision of a new world order.

When we choose to focus solely on the tragedy of what we now know happened in the Soviet Union, we obscure the intense enthusiasm and passion Yiddish writers around the world held for the greatest cultural experiment in history. A revolutionary hope drew Jews from all over the world, not because they were compelled to and not because they lived in fear of a totalitarian state, but because they had hope to write poems of praise for Lenin, for the rising and victorious proletariat.

Honoring Soviet antifascists means that we must remember that these people once passionately believed that the fate of the Jewish people was not only intertwined with but was the fate of all the oppressed of the world.

The great thinker of the left Isaac Deutscher once wrote:

“If it is not race, what then makes a Jew? Religion? I am an atheist. Jewish nationalism? I am an internationalist. In neither sense am I therefore a Jew. I am, however, a Jew by force of my unconditional solidarity with the persecuted and exterminated. I am a Jew because I feel the pulse of Jewish history; because I should like to do all I can to assure the real, not spurious, security and self-respect of the Jews.” 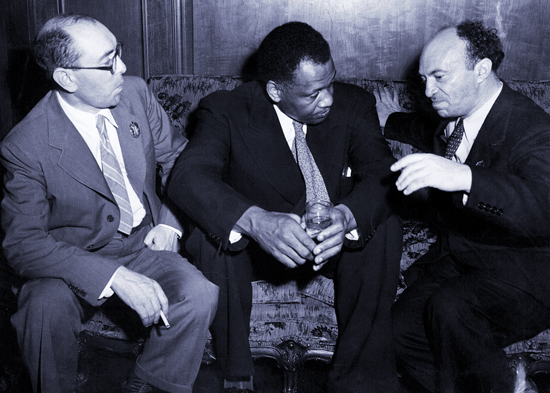 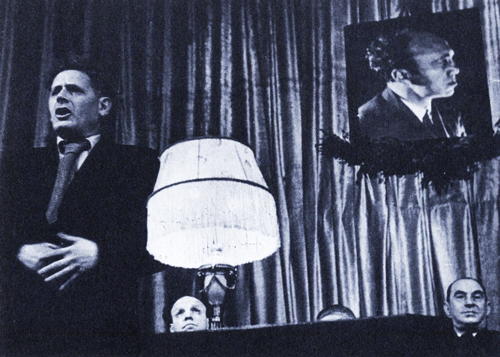 Peretz Markish giving a poetic eulogy for Shloyme Mikhoels, 24 May 1948.  Mikhoels’s murder in Minsk was the prologue to the arrests and executions of the members of the Jewish Antifascist Committee.

It is imperative to honor the memories of those whose voices were silenced by terror, by remembering that their life’s work was for the liberation of the poor and oppressed of the world, that to be a Jew was to understand what it is to be persecuted, and to speak out or act out or sing out or write out against it.